The functional zoning of urban landscapes is the main concern of the Charter. The individual functional areas for living, working and recreation are to be divided by extensive green belts and connected by transport axes. The spaces for living are the most important parts of a functional city, like it was called by the author Le Corbusier.

Compared to the old, organic cities, he calls for planning the new cities, adapting them precisely to the needs of the people. Their ways to work should be as short as possible and they and a lot of green space should be planned for their leisure time.

The Charter had a significant impact on urban planning after World War II until the 1970s. The Brasilian architect Oscar Niemeyer used ideas of the Athens Charter for the development of the new Brasilian capital Brasília. In 1958 he had warned that his utopian dream could not be fulfilled unless society itself was reorganised to suit it. That was one of the major problems, that architects dreamed that people are following their ideas.

The idea of an ideal city was abandoned already in the 1950s, because individual interests are too strong and needs cannot be comprehensively planned.

The Manifesto was published in November 1918. The Dutch text was used as the introduction to the second volume of the magazine "De Stijl". De Stijl was a group of radical artists and architects who searched for a new world order caused by World War I.

"De Stijl" prophesied a new style, a new aesthetic that combined architecture, painting and sculpture. They opposed individualism, arbitrariness, traditions and supported an internationally oriented way of life. Art was declared to be clear, elementary and sentimentless.

The manifesto I of De Stijl.

Le Corbusier's architectural manifesto from 1926 may guide the definition of modernism in architecture:

Oskar Schlemmer wrote this manifesto in 1923 on the occasion of the first Bauhaus exhibition in Weimar. The "Haus Am Horn" was presented as a result of the Bauhaus theories and works.

Schlemmer calls for everything to be reorganised after World War I and for people to learn to think in new categories, paradoxes, in order to create something new. The text is written extremely pathetically and metaphorically.

The phrase that the Bauhaus was a "cathedral of socialism", as a place for different people with one political goal, resulted that the manifesto was destroyed and not published. Nevertheless, a few copies were printed and caused in the following years that conservative politicians regarded the Bauhaus as a haven for radical left-wing artists.

Adolf Loos's ideas that all ornamentation created in the arts and crafts is superfluous. He argued economically that craftsmen take too long and are paid too little for their work. The consequence for architecture was to dispense with ornamentation of any kind, regardless of the material. All materials should not be wasted either.

He supported the ornamentation of the material, like the grain of wood and stone.

Adolf Loos first gave the lecture on this topic in 1910 at the Akademischer Verband für Literatur und Musik in Vienna, Austria. The essay was published in 1913 in Les Cahiers d’aujourd’hui in French as Ornement et Crime. Only in 1929 was the essay published in German in the Frankfurter Zeitung, as Ornament und Verbrechen. The essay is a component of all scriptures in: Adolf Loos: Sämtliche Schriften in zwei Bänden, 1. Band (Volume 1), Franz Glück (ed.), Wien, München: 1962, pp. 276–288, German version.

In 1924, the Czech theorist Karel Teige developed the term of poetism in architecture. In broad terms, he said that life and and joy must be embraced in art and architecture.

He propagated a turning away from the professionalism in art in order to strengthen a fresh creativity. He calls poetism the crown of life and means:

poetism is not literature, is not painting, is not art, is not an -ism. The new poetism is the language of signs, an optical form, a way of life with humanity.

Karel Teige was part of the group Devětsil. Architects like Jaromír Krejcar and Josef Havlíček implemented his ideas in architecture.

Poetism in architecture can be advertisement with different fonts that also glow in the dark as a symbol of life and the idea of speed and city.

Advertisment on Palace Habich from Josef Havlíček's in the street Štěpánská 33 in Prague.

Programme of the Staatliches Bauhaus in Weimar (Programm des Staatlichen Bauhauses in Weimar), 1919

Programme of the Staatliches Bauhaus in Weimar (Programm des Staatlichen Bauhauses in Weimar), 1919

This programme was the founding manifesto of the Bauhaus in Weimar, written by Walter Gropius. The woodcut is by Lyonel Feininger.

The central aim of this school was to bring together all artistic branches, i.e. architecture, sculpture and painting. The studies, which were called apprenticeship, were intended to familiarise the apprentices (not students) with the craft rather than with any kind of university system.

All training was focusing on architecture, considered as the highest level of work at this school.

It is interesting to note that the Bauhaus did not teach architecture during the Weimar period from 1918 to 1925.

In the 1920s, the use of reinforced concrete begins to become more common. The steel grids inside the hardened concrete give the structures stability. The grids are arranged in shells. The liquid concrete is sprayed into the shells. Afterwards, the concrete dries and hardens. The shells and grids can basically have any shape. This gives the architecture its charm, as roofs, pergolas or other parts of buildings seem to defy the earth's gravitational pull and do not have to be supported by pillars or something similar. Architecture before World War II did not yet make full use of the range of reinforced concrete structures. It is mostly oriented towards cubic forms to design the houses. Only occasionally experiments with this material are implemented. After World War II, buildings are created that apparently defy the laws of physics. One of the pioneers for that kind of architecture is Oscar Niemeyer, who uses reinforced concrete to construct, for example, the upper end of buildings much wider than the foundation and ground floor, or chooses very sweeping forms that only became possible through the use of reinforced concrete.

A detailed explanation and history of reinforced concrete can be read here. 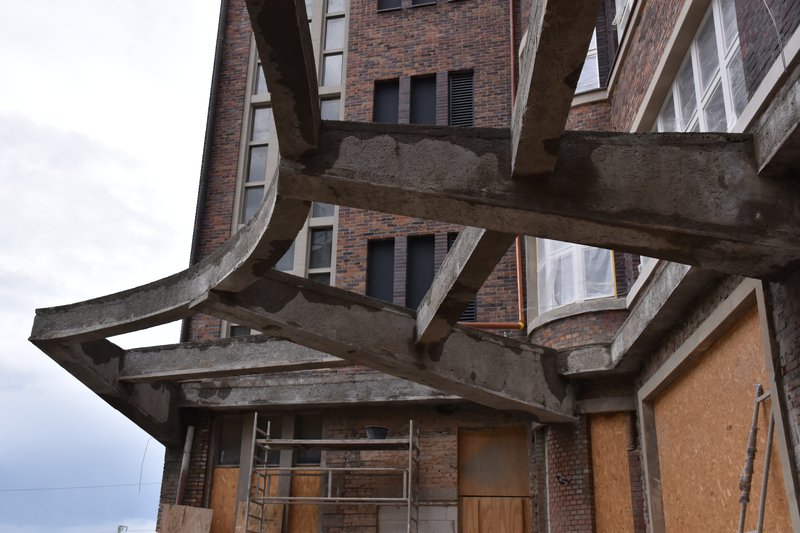 Ludwig Mies van der Rohe formulated these words at the end of a lecture on the Deutscher Werkbund.

He said, influenced by the world economic crisis that began to affect the world in 1929, that the worsening economic and social conditions are a huge challenge for the future architects. The main issue for architects is to produce still valuable objects. It should be not important, how they look like and where they are. To define their style is not important for him.

The Reconstruction of Architecture in the Soviet Union (Die Rekonstruktion der Architektur in der Sowjetunion), 1929

The Reconstruction of Architecture in the Soviet Union (Die Rekonstruktion der Architektur in der Sowjetunion), 1929

The Russian artist El Lissitzky's attempt to explain the new Soviet revolutionary architecture and its ideological, socialist theory. This meant, among other things, how it was possible to deal with social concerns such as living in good housing and the questions of individualism and a collective life.

The interesting thing about the book is the theoretical link between ideas in Western and Central Europe and those in Eastern Europe and their interactions. El Lissitzky spent a lot of time in Germany, working closely with Mies van der Rohe and Theo van Doesburg. He influenced architects and artists throughout Europe.

His main ideas about the new architecture can be found here.

Towards a plastic architecture (Dutch original?), 1924

Towards a plastic architecture (Dutch original?), 1924

A clear positioning of Theo van Doesburg, that previous building styles must not have any influence on the architecture of the future. He expresses the idea that function determines the form of a building.

Architecture should open up, i.e. the construction should dissolve the boundary between inside and outside. This is achieved through large windows and doors, glass walls and large terraces, e.g. on the roofs.

Inside, the architecture is the only plastic form, because paintings and sculptures are not allowed according to the author's views.

The American architect Frank Lloyd Wright was one of the first to use the term "organic building". A building should relate to its surroundings, to the nature, but also be good for people to live in. He emphasised the importance of light. The material of a house should be delicate like a spider's web.

In his thoughts about a new architecture, he tries to develop building types for the USA that are independent of styles in Europe. The best known of these are the Prairie Houses.