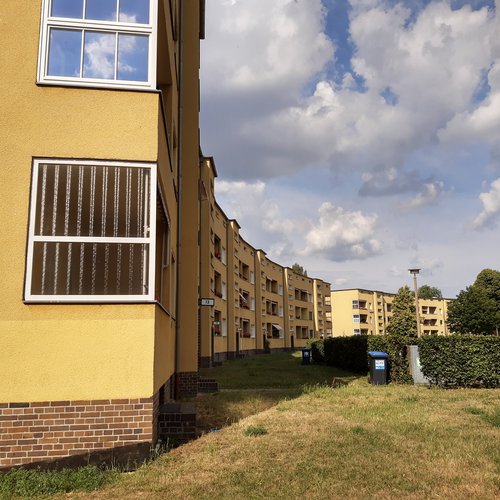 One of the few housing estates and houses in Leipzig that come close to attitude of modernism in architecture.

The architect and city building councillor Hubert Ritter used the small city-owned hill in Lößnig to build a system out of three concentric circles. This project is the only one in which the architect did not use any decorations. However, the construction of the houses was done in a traditional way and no standardized production was used.

The ideas of more light and green were implemented into this complex. The houses with flat roofs never stand as blocks and therefore have openly accessible courtyard areas. 5 of the 24 blocks were destroyed in World War II. In the 1980s, the Rundling was listed as a historic monument. The housing company LWB renovated the old stock and rebuilt the destroyed 5 houses after the year 1990. The new houses can be distinguished very well from the old ones. Although they are the same height, the new houses are painted in a strikingly dark yellow. The upper floor of the new houses was designed as apartments. In the old houses the upper floor served as a drying floor for the residents' laundry. The new houses have been given an underground car park, the entrances are clearly visible next to the houses. In contrast to the characteristic displays for the house numbers, more simple, flat displays for the house numbers were attached to the newly built houses. The windows of the apartments also differ. While the old houses have glazing bars in the windows and the kitchen windows consist of three parts, the new houses have glazing bars just in the front sides and one single window in the kitchen.

The inner ring consists of four-storey buildings. They are the tallest buildings in this housing estate, so that the inner ring at the highest point of the hill can be seen as the hierarchical centre of the complex. The top loft is smaller than that of the houses in the middle and outer ring, to create open terraces. The facades of the inner ring face the central square without balconies. All balconies are facing the middle ring. This is an exception, because care was taken with the middle and outer ring that the balconies never lay north. That is why the balconies in the two outer rings face east, with priority towards south and west. This gives the two outer rings a lively and non-uniform facade design.

The central square was originally equipped with a little swimming pool for children. Nowadays there is an overgrown round flower bed.

3 other buildings are added to the system. At Dürrstraße 69, 71, 73 and Brunhildstraße 1, 3, 5 there are 2 two-storey, straight buildings that have shops on the ground floor. The upper floor is used for apartments. The block Brunhildstraße 2 and 4 deviates significantly from the other buildings in its overall concept. The building has three floors and has a round shop on the right. All 3 buildings serve as a gate or an entrance situation that lead to the settlement.

This underlines the idea that the Rundling is an urban continuation of the Alt-Lößnig settlement west of it.

The first plans for this housing estate date from the end of the year 1928. In July 1929 construction works began and were finished already on April 1st, 1930.

Up until the 1970s, the main access to the settlement was from this side, which was the closest access to the tram stop in Bornaische Straße. In 1974, the new Lößnig tram terminal was opened to the east of the Rundling.

In 1999 the LWB received the Hieronymus Lotter Prize (Hieronymus-Lotter-Preis) for the renovation in line with the preservation order.

The Rundling with its architecture had a lot of influence on the interwar architecture in Leipzig, like the housing estates Faradaystr. and Magdeburger Str. 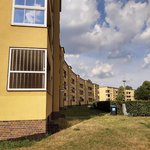 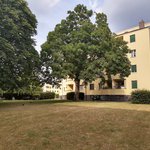