Having previously built only detached or partially detached houses, Warners began experimenting with the formal language of the Amsterdam School architectural style in 1913. This expressive and traditional architectural style appealed to him greatly. In addition, his friendship with the architect Piet Kramer, whom he met through his membership in the Architectura et Amicitia society, stimulated the development of the formal language of the Amsterdam School. Characteristic projects include the design for a water tower in Noordwijk (1916), 'Huize Zuidwijck' on Lairessestraat (1917), a block of five houses at Emmastraat 36-44 (1918), and an organic 'dune villa' in Zandvoort (1920). Through contact with architect H. Th. Wijdeveld (1885-1986), Warners was inspired not only by the Amsterdam School, but also by the work of American architect F.L. Wright (1867-1959). This source of influence is visible in the design of the country house 'De Lange Akker' (1919-1920), the striking 'checkerboard' block of houses on Hacquartstraat (1921-1923) and the villas on J.J. Viottastraat (1925).

At the beginning of the 20th century, the "apartment house" or the "multi-story house" was not yet a well-known type of housing in the Netherlands. Warners introduced this new type of housing and took the lead in developing high-rise buildings in the Netherlands. These "multi-story houses" were equipped with modern comforts and designed for efficient living. Comfortable living was paramount, and the apartment offered opportunities that were unavailable or very difficult to achieve in single-family homes in the city. In 1913 Warners built his first multi-story house, 'Loma', on Lairessestraat in Amsterdam, commissioned by Mr. C.W.D. König. In order to develop similar projects, he founded N.V. Amsterdamsche Maatschappij tot Exploitatie van Etagewoningen (A.M.E.E.) in 1914, together with his father-in-law Allert de Lange. He held administrative positions within the N.V. and until the early 1930s built apartment blocks, offices and especially apartment buildings for A.M.E.E. The following buildings were erected on the Lairessestraat: 'Zonnehoek' (1916), 'Zuidwijck' (1919), 'Westhove' (1921) and 'De Steenhoek' (1921). Other characteristic storey houses realized by Warners with the help of A.M.E.E. are 'Parkwijk' on the Waldeck-Pyremontlaan (1923), 'Oldenhoeck' on the Jacob Olbrechtstraat (1926) and 'Schouwenhoek' on the Apollolaan (1934). Outside Amsterdam, Warners built the 'Oldenhove' building (1930) on the Laan van Meerdervoort in The Hague, a residential building with four residential floors, stores, offices, and a car dealership. In addition to designing multi-story houses, Warners also experimented with the two-story apartment type, double urban villas, and apartment blocks for the Amsterdam housing association 'Ons Huis'.

In addition to dozens of multi-story houses, Warners also designed clubhouses for the Amsterdam IJsclub (Ice Club), Amsterdam Golflinks, and an official residence for the Kennemer Golf and Country Club in Zandvoort (1930). A ski enthusiast and co-founder of the Nederlandsche Skivereniging, he was responsible for the graphic design of the association's logos and periodicals. Warner's oeuvre also includes various catering establishments, of which 't Brouwerswapen at Rembrandtplein in Amsterdam (1938) and the café-restaurant 't Goudenhoofd at the Dagelijkse Groenmarkt in The Hague (1939) are two characteristic examples. Warners also designed the interiors and furniture.

In addition to numerous residential buildings, Warners designed many important office and functional buildings, including the "Atlanta" (1928) on the Stadhouderskade, the "Candida" (1930) on the Nieuwe Zijdsvoorburgwal, and two offices of the A.V.R.O. (1928-1938) at Keizersgracht 105-107 in Amsterdam. After the Second World War, his activities shifted from Amsterdam to the Tilburg area and from 1945 he worked together with his son Allert. During this period he built the factories 'Erdal' in Amersfoort (1936-1941), 'Rheem-Evenblij' in Zaandam (1948) and the soap factory 'Sunlight' in Vlaardingen (1949), as well as several country houses for textiles.

His views on architecture were written down in numerous articles published in Architectura Bouwkundig Weekblad and in daily newspapers, and he gave numerous lectures. Together with Professor J.G. Wattjes he wrote the standard work 'Amsterdamse Bouwkunst en Stadschoon 1306-1942', which was published by his father-in-law Allert de Lange in 1943.

Warners died on February 20, 1952 during the remodeling of the office for the Hollansche Bank Unie in Amsterdam. He was buried in the Zorgvlied Cemetery in Amsterdam. After his death, the architectural firm was taken over by his son Allert, and A.M.E.E. remained in the hands of his two other sons, Henk and Erik, until 1986.

Biography translated from a text of Het Nieuwe Instituut. 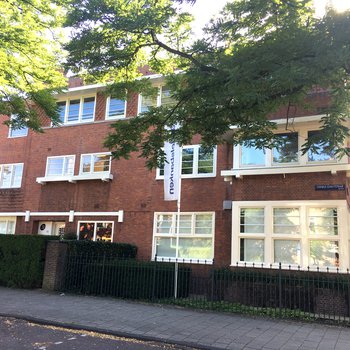 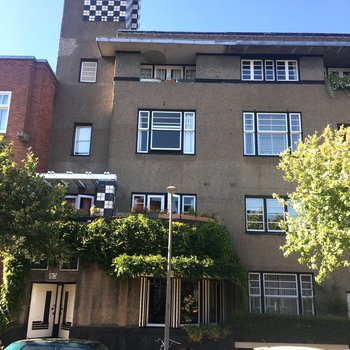