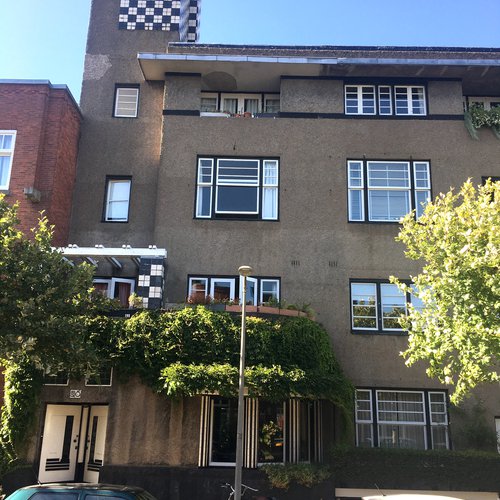 The bay window and balcony of Hacquartstraat 8 are new and do not fall under the protection.

On a more or less rectangular plan, with recessed and projecting wall surfaces, the rowhouse block is built under a flat roof with a partially projecting concrete roof band under an attic. The projecting cornice, repetition of windows, tile decoration, and wooden pergola over the continuous balconies provide a strict horizontal articulation. The block consists partly of three and partly of four floors. The facade is made of bricks and plastered with a layer of bark mortar. The rhythm of the facade, created by recessed and projecting wall sections at the front, is repeated in a variable manner in the rear facade.

The facade of Nos. 6 to 14 consists of three stories under a projecting concrete roof band. The upper attic of No. 14 is slightly higher, and the chimney bricked up behind the attic has a black and white colored square brick decoration. Nos. 8 and 14 have a pentagonal window on the first floor under a generous concrete overhang with a balcony above. The balcony wall of No. 14 is covered with an alternating pattern of black and white square tiles. Between the bays, the half columns are also decorated with square black and white tiles. The deep rectangular doors are all in the style of the Amsterdam School and have a narrow ladder window divided by wooden bars. The skylights of the entrance are recessed into the wall surface and consist of diamond windows. The first floor windows are divided into three sections with ladder windows as transom windows. On the second floor there is a row of windows, some of which have been replaced by modern windows. The windows on the upper floor, most of which still have the original muntins, are located between wall surfaces covered with black and white tiles. No. 12 has a walled-in balcony on this floor. Brick ventilation grilles were built into the facade.

The transition from the front facade to the side facade at No. 6 is through a chamfered corner bay with ladder windows. The narrow entrance bay is clearly set back.

The facade of Nos. 16 to 22 is also three stories high and recessed on the upper two floors. The first floor is set behind an openwork wall surface with a pattern of alternating black and white tiles. These wall surfaces support a wood pergola above a full-length balcony. The windows on the upper floor, divided into three parts, have ladder windows. On the first floor, the windows are divided into three single-light windows that also have ladder windows as transom windows. The doors are detailed as described above.

No. 22 has a square bay window on all floors under a concrete overhang with a loft above. The windows have ladder windows.

The rising gable wall of Nos. 24 through 28 consists of four stories under a concrete overhang with an attic above. The chimneys have a block pattern of black and white square tiles. The narrow row of ladder windows on the top floor is interrupted in the center by a bricked-up balcony. On the first and second floors are deep-set windows, also with ladder windows. The first floor windows are divided into three sections with ladder windows as fanlights. No. 28 has a pentagonal window under a concrete overhang with a balcony above. The windows are divided by half columns decorated with black and white tiles. 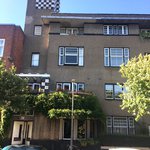 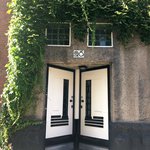 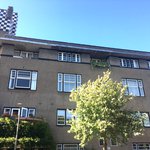 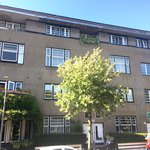 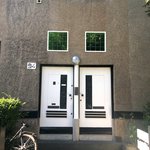 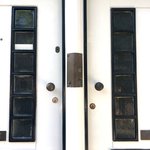 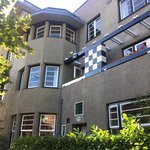 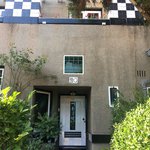 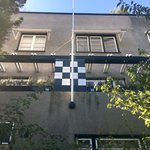 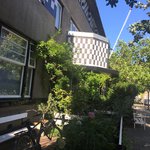 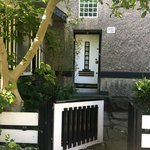 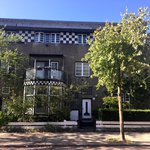