He studied at the TH Munich and later moved to the ETH Zurich to Karl Moser and Hans Bernoulli, where he graduated in 1918.

Schmidt went to the Netherlands in 1920. There he was influenced above all by Jacobus Johannes Pieter Oud and worked for the renowned Michiel Brinkman in Rotterdam. Back in Switzerland, he founded an office with Paul Artaria. They became leading architects of the Neues Bauen movement in Switzerland with their work on housing and housing developments.

In the 1930s Schmidt went to the Soviet Union to help plan and implement industrial cities. After World War 2, Schmidt was appointed principal architect at the Institut für Typung in East Berlin in 1956, and later he became director of the Institute for the Theory and History of Architecture at the Deutsche Bauakademie, where he also received an honorary doctorate.

The GDR awarded him the Patriotic Order of Merit (Vaterländischen Verdienstorden). He spent his retirement in Switzerland.

Schmidt was a co-founder of the Party of Labor of Switzerland (Partei der Arbeit der Schweiz), a communist party for which he was active in Basel-Stadt after World War 2. He was a founding member of CIAM. 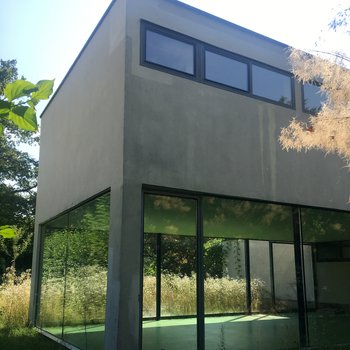