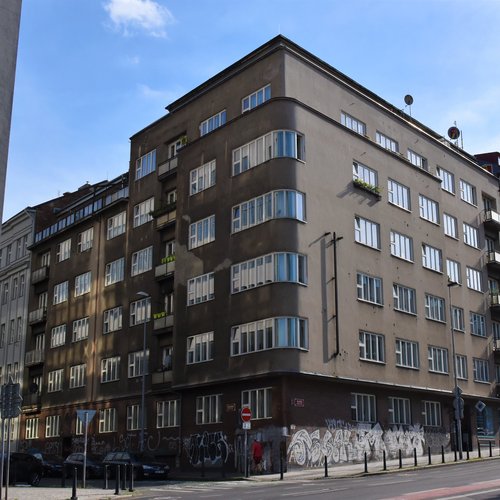 Dynamic shapes and holes in the plaster...

Originally, the two houses were painted white, which made them appear lighter and more elegant. The lower house Veverkova 37 combines all details of the house Veletržní 29. Its dynamic shapes of the round corner and the curved window panes make this house very extraordinary among the Prague apartment buildings of the interwar period.
A central large oriel distributes the surfaces of the facade non-symmetrically. The short facade on Veverkova Street has one horizontal row of windows. On the longer facade in Veletržní Street, a wall surface next to the corner was designed with a very distinctive flagpole. This is followed by three vertical rows of windows. The upper end of the oriel is formed by balconies. It is typical for Prague apartment buildings from this period that the top floor is stepped back, creating roof terraces.
Katona chooses the same size for all the windows. Balconies with glass railings are inserted on both sides of the house, an unusual choice of materials for that time. Inside, a column runs in front of the round windows, which was apparently necessary for the statics of the house.
The neighbouring house at 37 Veverkova Street is one storey lower. That is why the last vertical zone of house Veletržní 29 was aligned with it.

The house was built from 1936-37. At the same time the architect Ervín Katona realized a two adjoining houses not far from this spot.

In the plaster are visible several holes, which may either date back to the times of World War II or the 1968 Prague Spring. 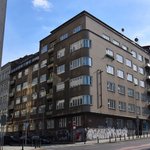 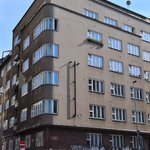 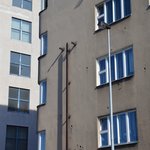 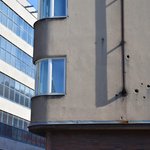 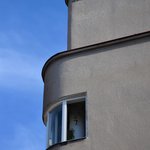