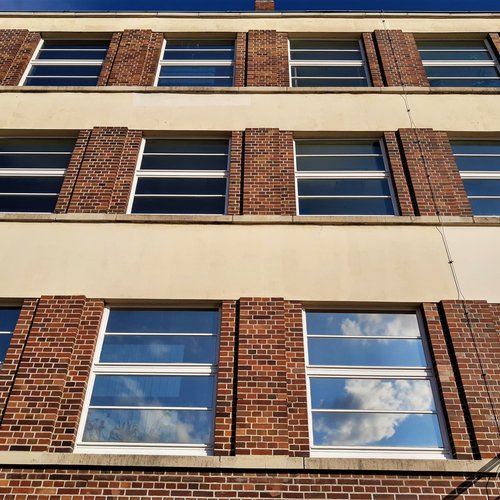 Today's use: Hospital, the oldest part is empty

Apart from the housing estates, the two buildings for the hospital in Zwenkau are Schoder's only project of a public commission in Germany.

The hospital area consists of two buildings that are not connected. The first building section is the smaller building on the northern edge of the site. In this building with two storeys and a flat roof, the staircase tower on the north side is particularly striking. This tower has small windows divided by concrete strips, a typical detail of Thilo Schoder's architecture. On the south side were put the sickrooms with three-part vertical sliding windows, providing a large incidence of light.

The second construction phase comprises the much larger building complex. On the west side (Pestalozzistraße) leads the main entrance into the interior. This main entrance is reached by a two-armed staircase. To the right of the main entrance is a stone marking the year 1929 as the construction began. The west facade has large windows, the lower part can be opened up. On the second floor are integrated even two large six bedroom flats as well as smaller flats for doctors and staff. The northwest corner of the west facade is decorated by a staircase tower. To the northwest is the Medical centre (Ärztehaus), whose exterior design is less conspicuous. In order to make particularly good use of sunlight, the hospital has a long building wing in west-east dimension, so that the patient rooms are inserted on the south side. They have large windows that can be opened completely. The lower area of the windows is fronted by small balconies with railings. This area could be used to improve the turning and rotating of beds in the rooms. The large windows on this south side almost dissolve the brickwork and dominate the shape of the facade. At the southwest corner is the largest staircase tower of the second hospital building, again typical for Schoder's work with the concrete bands between the small windows.

Both hospital buildings were constructed as solid masonry. Parts of the facades are plastered, others were given clinker bricks as decoration.

Zwenkau urgently needed a new hospital. The old hospital had only 60 beds and in the 1920s the district of Leipziger Land grew to 100,000 people. The extension of the hospital building became necessary. Thilo Schoder won the first prize. He was already known in the town for the Zwenkau housing estate. The second prize was won by Hugo Koch, who was appointed for construction management and as site manager. Planning began in February 1928, and the building permit was issued on May 28th, 1928. The smaller of the two hospital buildings went into operation as an infection hospital in 1929. The larger second construction phase with a medical centre to the northwest was completed on July 10th, 1929. The use of the hospital was approved by the Leipzig district administration on November 26th, 1930. The buildings were purely state-of-the-art.

Both buildings were declared cultural monuments in 1987. In 1993, a renovation took place, followed by two extensions. One, which is not particularly noteworthy, stands between the two Schoder buildings, the second takes up design features of the main building in the southwest. 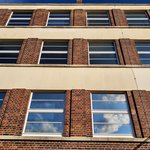 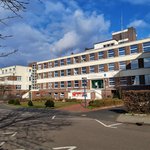 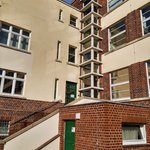 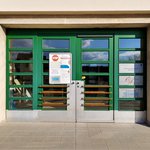 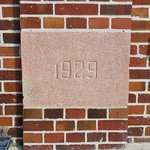 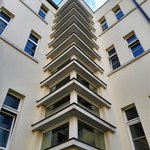 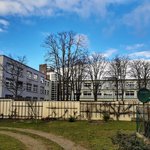 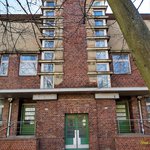 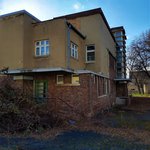 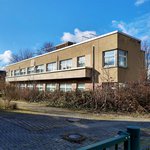 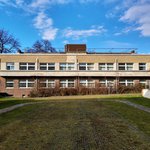