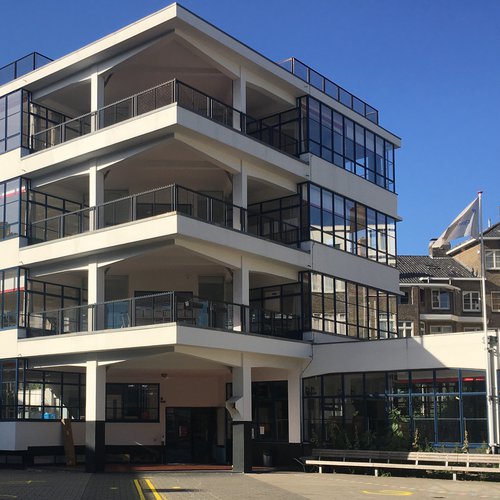 The complex consists of the teaching building itself and an access block comprising an occupational workshop, 2 dwellings and a bicycle parking area.

The teaching building has four floors above ground, a terrace and a basement. The ground floor is occupied by the foyer and the gymnasium. The following floors are occupied by the classrooms, some of which are enclosed and brightly lit by large windows, while others face outwards to make the most of the sun's rays. The combination of large white enclosure planes with the glazing of the windows and the glass panels is a striking example of the building's design.

The combination of large white cladding planes with the glazing and cantilevered slabs makes it a precedent for Richard Meier's white architecture. The large terrace covering the building's roof is a great example of this. The large terrace that covers the building can also be seen as a foretaste of Alejandro de la Sota's Gymnasium at the Maravillas School in Madrid.

Following the principles of modular architecture so popularised by Le Corbusier through the CIAMs, the entire floor plan of the building is generated from a 3 x 3 metre grid. The structure is of reinforced concrete, with grid girders, some in a stylised cantilever, supported by pillars every 9 metres. It was completed in 1930.

It is a three-storey building, with the administration and management, the living quarters for the caretakers and a workshop for occupational therapy in a cantilevered body that accentuates the ethereality of the cantilevers of the teaching building, which are rotated 45º with respect to it.See interesting photos and a description also here.

Since the beginning of the 20th century, open-air schools have been built to help physically weak children gain strength with the help of sunshine and fresh air.

As many as 6 drafts were made for the building, each time refining the form and achieving a more stylised structure, and 4 other proposals were made for the access area. It was thought that the perfect location would be in the middle of the countryside, but after several disputes with the City Council, the client and the architects were only able to obtain an urban site.

The concept of this school influenced other architects. A similar type of school are representing the French schools in Prague, Czechia. 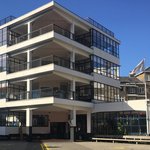 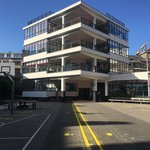 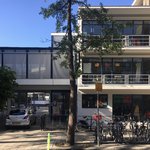 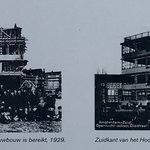 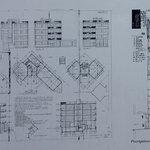