Johannes (Jan) Duiker is regarded as the most important architect of Nieuwe Bouwen in the Netherlands. His optimism and belief in progress through technology were brought together in a sensuous functionalism.

Duiker allowed the structural properties of modern materials such as steel, reinforced concrete and glass to speak for themselves. He applied them without decoration and as slender as possible. In every building task, he sought the essence of efficiency and 'spiritual economy'. The organisation of space and the way he used daylight were particularly innovative.

Duiker was the son of a teacher, headmaster of a school for poor children in Den Haag. After secondary school, he did a one-year apprenticeship in a carpentry shop, after which he studied architecture in Delft from 1908 to 1913.

With his study friend Bernard Bijvoet, Duiker started an office in Den Haag in 1916. Two years later, they won the competition for the Rijksacademie voor Beeldende Kunsten in Amsterdam. Although their design was not carried out, it did bring them national fame.

They worked together on a number of housing complexes in Den Haag, the first designs for the Third Technical School in Scheveningen (from 1922) and the first annexes of Zonnestraal near Hilversum. This sanatorium was originally intended as a follow-up colony for tuberculosis patients who were (almost) cured.

Duiker was active in the progressive Amsterdam Architects' Association "de 8", which he joined in 1928. When the modernist journal "de 8 en OPBOUW" was founded in 1932, he became its editor-in-chief. In many articles he expressed his vision on the "necessary development of architecture", which should be businesslike but also humane. 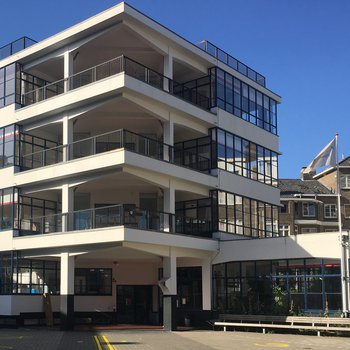