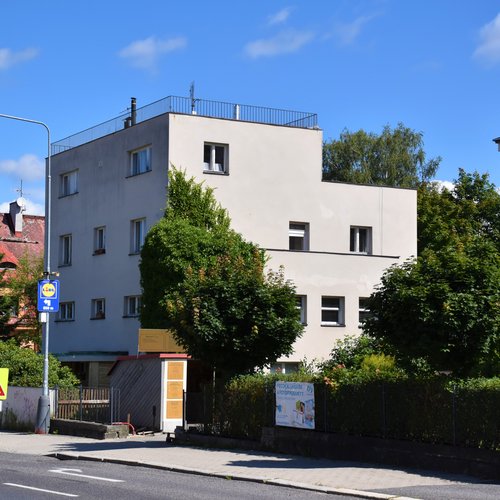 The most beautiful side of the villa is mostly hidden. The roof terrace is on the east side on the second floor gives the villa a more expressive design.
The west side faces Palackého Street, and the south side is also clearly visible. However, so many alterations have been made to the villa that it is difficult to recognise anything of the original state. Originally, there were no windows on the top floor on the west side. This gave the facade a very striking appearance, similar to this house in Altenburg.
One of the few things that originally belonged to the strongest ornaments on the building is the entrance door, decorated with bars. The entrance area is cladded in travertine.
The website TOPOMOMO describes the houses interior and the former function of the lower area as a doctor's office. On the website www.jablonec-gablonc.net are many pictures of the interieur. The light architecture is dominated by very heavy interiors. With this style, Kulka's closeness to Adolf Loos becomes clear, who chose similar patterns. Likewise, Loos's Raumplan (space plan) is applied to this house. As a result, there are several levels in the building.

The villa was built in 1933 and 1934. A stamp can be seen on a plan which testifies that the house was collaudated on 10 January 1935. The German-speaking family was forced to leave the house in 1945. The villa was divided to create flats. Although the house was listed as early as 1958, it was heavily remodelled. Some years ago, the municipality of Jablonec nad Nisou bought the villa. It is not clear whether it will be open to visitors in the future. 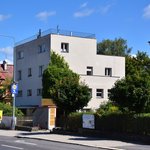 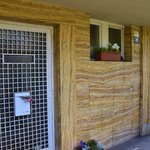