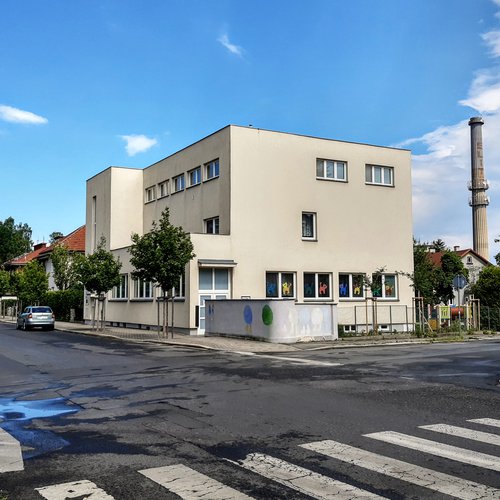 A rare gem of modernist architecture in Northern Bohemia. Why? You can find the answer in the history part of this article.

The house consists of four geometric, cubic forms. To the north-east is an entrance door and a tower-like part of the building. This entrance served private visitors. The main area of the north facade is dominated by a long front and a porch on the ground floor. This was originally open on the right-hand side, which gave the architecture lightness. For later uses, the open areas were closed to gain an interior space. A similar approach was taken on the second floor on the south side, where the former sun terrace was also walled up to create rooms. Thus, the villa no longer has a terraced exterior, but rather a block-like appearance. On the west side, the side entrance served for servants and customers.

The main entrance door led visitors up a curved staircase to the first floor. In addition to living quarters, there was also a gymnasium with a shower. The house was divided into a private and a public space, because Eltis had his office in the house.

Nowhere is something said about the material used for the construction. We assume, that it is made of reinforced concrete.

In terms of architectural history, this house is very interesting. According to this homepage, and according to the year of construction this is understandable, it is one of the first and also few private houses in North Bohemia with a flat roof. The authors rightly note that in Czechoslovakia, functionalist architecture was a kind of state architecture in areas with a Czech-speaking population. In the former German-speaking regions of Czechoslovakia, i.e. a large part of the border areas like Varnsdorf, the administrations and clients were rather sceptical towards architecture of an international format. So it was very difficult for the developer Eltis to get a building permit for this house with a flat roof from the town council Varnsdorf. Since the client was a lawyer, he knew how to help himself, filed an objection against the town council at the regional government authority in Prague and won. The government authority explained the beauty of the "modern" architecture to the Varnsdorf town council. This can certainly be understood as a kind of side blow by a Czech authority against a (conservatively minded) German-speaking authority of those years.

Martin Eltis lived in the villa just until the beginning of the 1940s because he was Jewish. The Nazis converted the house into a kindergarten. Initial building plans called for closing the sun terrace on the second floor. After the war, the building was used as a children's home, and since 1967 again as a kindergarten. The conversion plans of the 1940s to close the terrace were implemented in this time.

It is mentioned that now and also before, there was no care in dealing regardfully with the historic building. Moreover, the building is not listed by the National Heritage Institute, although it is historically specific.

On this homepage you can see some historical documents about the villa and some pictures of the present state. On another homepage is a sketch of the house showing the former sun terrace on the second floor as part of the south and west facades. 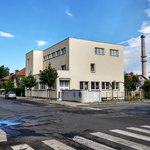 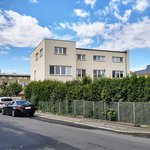