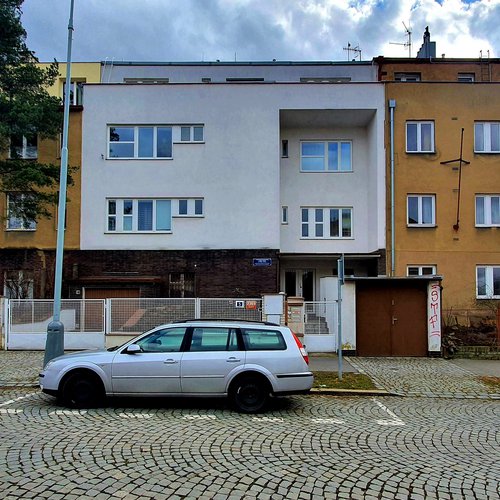 The house of Karel Teige, the most important Czech theoretician on art and architecture of the interwar period.

It is a masoned terraced house with reinforced concrete ceilings. It consists of four storeys. The area rises slightly to the garden side in the south, whereby the basement on the street side in the north appears as the ground floor. The entrance on the north facade is on the right-hand side. This area of the facade is very effectively worked as a niche that also extends to the ground floor and the first floor. The second floor terraces facing the north and south. Nowadays, the flagpole that was once attached to the north facade is missing. Today, a small blue memorial plaque with white letters reminds us that Karel Teige lived in the house from 1939 to 1951.

The house was built between February 3rd and July 27th, 1938. Karel Teige and his sister Jana Teigová commissioned the building to Jan Gillar, who was a friend and also a member of Devětsil. Karel Teige and Josefina Nevařilová lived in two minimal flats on the second floor with two bed rooms. Two families lived on the first floor. On the south side this flat was directly connected with the garden. The caretaker's was situated on the ground floor. Teige's sister Jana Teigová, his mother and aunt shared the two flats on the third floor.

The house was inspired by the ideas of a collective house that connected Teige, who was focused on theory with the architect Gillar. But Teige wanted to have individual spaces. On the second floor was shared the bath room, the toilet, the balcony and a kitchen niche facing the street. At the end it was no problem, because he shared it with his partner Josefina. The winter garden of the Nevařilová apartment and Teige's study and the common balcony faced the south with the garden. 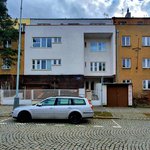 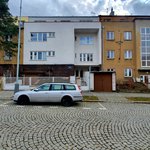 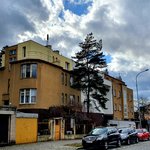 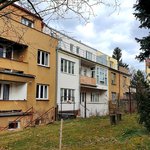 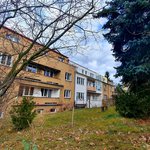