This company, which produced cable cars, was a big player in the history of transport. They achieved various records, such as the longest (34 km) and highest cable car in the world in Argentina, the northernmost on Svalbard and the southernmost in Chile. Some cable cars are still operating today, such as the Predigtstuhlbahn near Bad Reichenhall, Germany, from 1928 or the Teleférico del puerto harbor cable car in Barcelona, ​​Spain, from 1931. After the global economic crisis, the company was taken over by Felten & Guilleaume Carlswerk AG from Cologne in 1932. After World War II, the company was nationalized and from 1954 to 1990 referred to as VEB Verlade- und Transportanlagen Leipzig, or VTA for short. From 1985 it became the parent company for TAKRAF, a manufacturer of cranes and opencast mining systems. The production in Leipzig-Eutritzsch ended in 1991 due to decisions in reunified Germany. 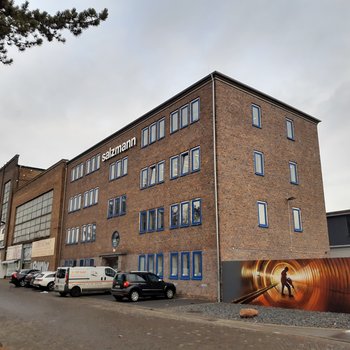