Miladin Prljević (in Serbian Cyrillic Миладин Прљевић) was an important architect in Yugoslavia before and after World War II. He was employed by the Ministry of Construction until the Second World War. He also took on private commissions and over one hundred buildings were designed by him.

He graduated in architecture from the Belgrade Faculty of Technology ((Tehnički fakultet) in 1924. He worked briefly in Cetinje and Podgorica, both cities in Montenegro. From 1928 he taught at a Belgrade university and took on private building commissions from 1931. In the 1930s, his buildings became landmarks of Belgrade.

After the World War II he worked for the state company "Srbijaprojekt", which executed the most representative buildings of the young, socialist Yugoslavia. One of the projects was the town hall in Kragujevac, Serbia.

Some more information about Prljavić. 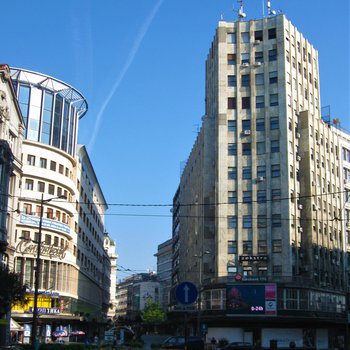