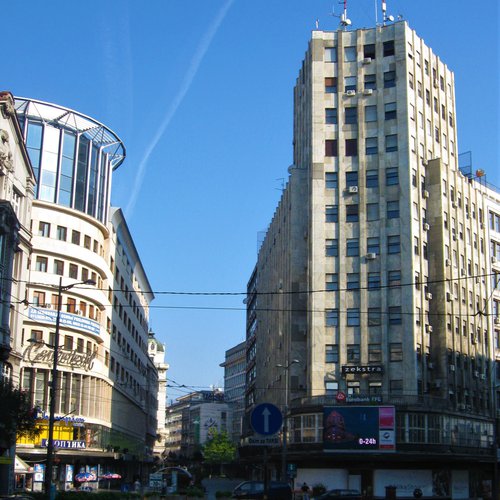 Belgrade's first high-rise building. During socialism the regime attached slogans, pictures and symbols to the house.

The Palata Albanija (in Serbian Cyrillic Палата Албанија) has nine floors on each side. The part at the junction, designed like a tower, has 13 storeys and a height of 53 metres. The vertical structuring of the façade makes the house appear even higher. The ground floor and the first floor extend beyond the concave tower as a convex geometric shape. The building has four underground floors. This house was the highest reinforced concrete solitaire with a skeletal structure in Yugoslavia of its time. It is pointed out, that the strengths of the concrete is higher than the strengths provided by the then regulations. Also it is used high-grade steel in the columns, with which Đorđe Lazarević went 20 years ahead of world norms and standards. The bombing of Belgrade during World War II did not harm the building's construction, when even a half-ton bomb failed to destroy it.

A special accent on the building is the facade cladding, once lined with greenish Italian marble "cipolina", and after the war with bluish-gray marble.

The building was used in the first years as the seat of the State Mortgage Bank (Državna hipotekarna banka) of the Kingdom of Yugoslavia. It is situated in the centre of the city on one of the most important streets, Knez Mihaila and Terazije. The construction works began on July, 16th 1938 and were finished on October 20th, 1939.

The building was declaired as a cultural monument in 1984.

The name "Albanija" comes from a restaurant that stood on this spot from the 19th century until the construction of this building. 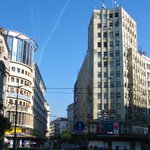 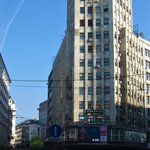