He used his experience and knowledge from his apprenticeship as a carpenter, his studies and his work at Christoph & Unmack in Niesky for the technical development of wooden buildings. His most famous houses in Germany are the Konrad Wachsmann's house in Niesky from 1927 and the summer house for Albert Einstein in Potsdam-Caputh from 1929.
When the Nazis seized power in Germany in 1933, he decided to stay in Italy. Because of his Jewish origins, but also his sharp mind, he decided never to live in Germany again. In 1935, he visited his native city of Frankfurt (Oder) for one more time. In 1939 he moved to Paris and enlisted in the French army. But in 1941, with Albert Einstein's help, he fled to the USA. There he met Walter Gropius and founded the Packaged House System with him. These prefabricated wooden houses could be assembled in just nine hours. Despite the good idea, the company went bankrupt after a short time. Shortly afterwards, his mother, a brother and a sister were murdered in a concentration camp in Riga.
In 1943, Wachsmann put his knowledge at the disposal of the US government and the US army. He built the German village, a replica of a German settlement, to test the effects of incendiary bombs. Wachsmann became a US citizen in 1947 and then a professor at the Institute of Design in Chicago. He returned to Europe regularly from 1956, when he became the head of the architecture class at the Summer Academy of Fine Arts in Salzburg. However, he remained anchored in the USA and began working at the Southern University of California in Los Angeles in 1964. In 1979, the summer house in Potsdam-Caputh was to be restored to mark the 100th anniversary of Albert Einstein's birth. For this occasion, Wachsmann travelled to Germany (GDR) for the last time.

It was his wish, to be buried in Frankfurt (Oder) on the main graveyard with his sister and her husband. 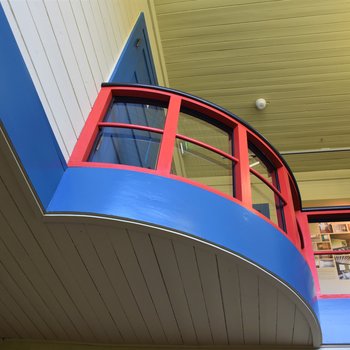