He studied at ČVUT between 1928 and 1933. He became one of the most left wing architects in Czechia. Together with Jiří Štursa and Jiří Voženílek he was a member of the left wing group PAS (Pokroková architektonická skupina). They wanted to solve the housing problem by looking for forms of standardisation and price reduction.

In addition to theoretical work and publications in the magazines Stavba, Tvorba and Magazín Družstevní práce, they also had a joint office in Prague at Wenceslas Square 44. They planned apartment buildings and a detached house in Prague and its surroundings. Villa Volman became today their best-known project, which they never published. In doing so, they tried to preserve their left ideology and not to be misunderstood in terms of content by an upper-class villa.

Janů was arrested by the Gestapo in 1941 for alleged illegal acts and imprisoned in a concentration camp for more than a year.
Immediately after the war, he published his doctoral thesis Socialistické budování (Socialist construction), which deals with an idustrialised construction method. He was in contact with people in the state system and became a professor at the ČVUT. In addition to the theoretical study of serial construction, he designed prefabricated buildings in Czechoslovakia. What began as a theoretical work in the 1930s, he implemented his socialist ideas for urbanism in the 1950s. 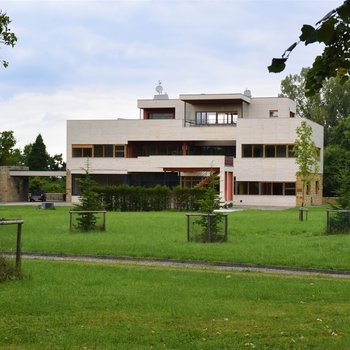