He came from a distinguished Jewish family who were successful in the malt business. In 1910 he went to Vienna to study civil engineering with Adolf Loos. Although he started to live in Vienna, he took Czechoslovakian citizenship after the break-up of the Habsburg monarchy in 1918. Apart from a few buildings in Vienna, he mainly designed houses in Olomouc. With his wife Hilde Blumberger, who worked as a textile designer, he fled to Prague for a few months after Austria's Anschluss in 1939. Afterwards they fled to Great Britain, where he designed furnishings and utilitarian objects. The estates of both are in the Victoria and Albert Museum in London. 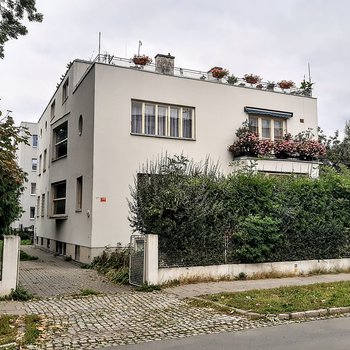