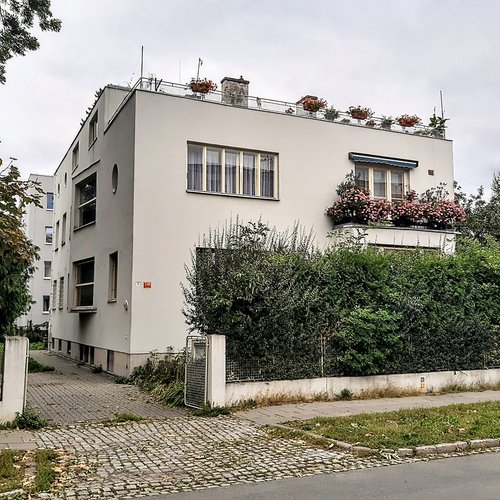 Some say, it is a little bit of Vienna modernism in Olomouc.

The large windows set at a slight angle on the west facade as a part of the living rooms, are something very special, not only for the modernist architecture in Olomouc.
The house is roughly composed of two cubes. The front, lower one faces the street. Since this is the south side, large windows have been inserted behind which the living rooms are located on the left side and another room on the right side. These rooms on the right side have a oriel on the ground floor and a balcony above it, creating a third small cube on the house. The flat roof of the front cube is u used as the house's roof terrace. The higher cube at the rear, with three storeys, is closed off by an unobtrusive gable roof. When comparing with older illustrations, it is noticeable that the first floor once had round windows. Square windows were inserted during a conversion, apparently turning the former attic into a further flat. The different window shapes and sizes play a major role in the design of the house. Groag took over this signature from Adolf Loos, but without implementing the Loosian principle of the Raumplan.
The entrance to the house is not visible from the street and is situated on the rear of the east facade.

The house was built in 1933. The Briess family fled from Olomouc in 1939 because of their Jewish origin. During World War II the Gestapo used the house. After 1989 the descendants of the devolopers were able to get the house back. 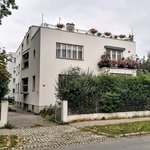 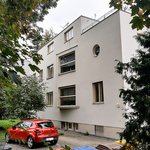 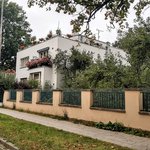