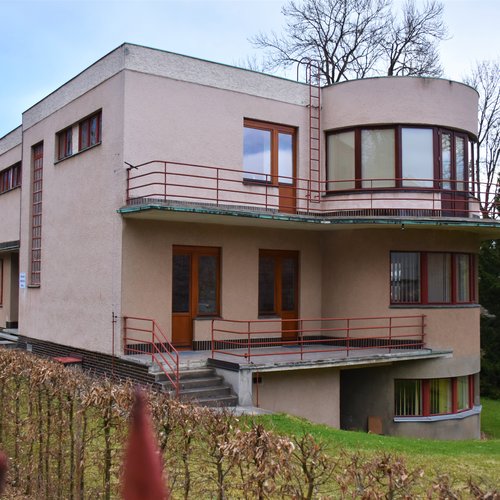 The functionalist masterpiece of the Giant Mountains region.

The sparse, almost hard facade facing the street with only a few windows can often be observed at single-family houses and villas built in the 1930s. This also makes this house appear more brittle than the garden side. Facing the street to the west, the interior on this side houses the toilets, the bathroom, the former pantry and the servant's quarters. From the street, you can already see on the south side of the house that something great is happening here. The large balconies that run around the semi-circular facade are giving the villa a elegant and graceful touch. The balcony on the upper floor stretches across the east side. The east side could be called the main facade. All the living areas and the children's rooms were on the upper floor, facing the garden. The dining room was housed in the rounded south-east room, very close to the kitchen. Next door was the living room, recognizable by the large window on the outside, behind which there is a winter garden connected with the living room. The shorter balconies were once part of the children's rooms. There is another architectural highlight on the north-east corner: the spiral staircase. Using the staircase making access to the large terrace on the ground floor at the roof of the garage. It once served as a place to stay for the patients of the doctor's office. The entire ground floor was used as a doctor's office. Due to the location on the slope, the basement rooms on the east side become a visible area. In addition to the boiler rooms, the basement also housed a water basin for hydrotherapy. This theme combines beautifully with the architect Kolátor, who built many outdoor pools in Czechoslovakia. The motif of the lido architecture can also be seen on the railings and on the spiral staircase, which could also be a diving tower.

The house was built in 1933-1934 as a residential building and medical practice.

The authorship of the house is not really clear. All three names of the specified architects appear on the blueprints. The strongest suspected Kolátor as the author of the design. The other two probably took part as master builders.

After the Jewish owner Jiří Fischer left Czechoslovakia in 1938 due to the German occupation of the Czechoslovak border areas, the furniture in the house disappeared during World War II. Fischer returned to Jilemnice in 1946. Since we have no further information about his further life, it can only be assumed that his house was taken away from him after 1948 due to the communist takeover. In the following years the building housed a kindergarten. In 1982 it was decided to accommodate an art school in the house, which uses the building still today. 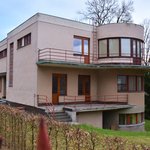 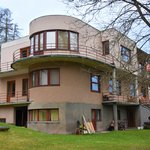 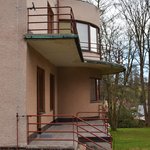 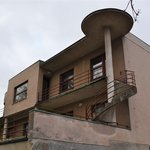 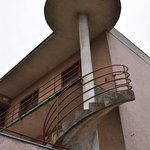 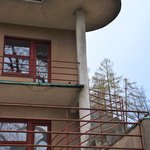 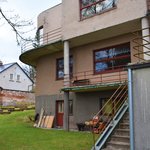 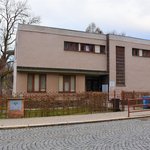 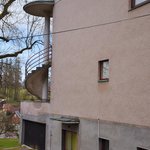