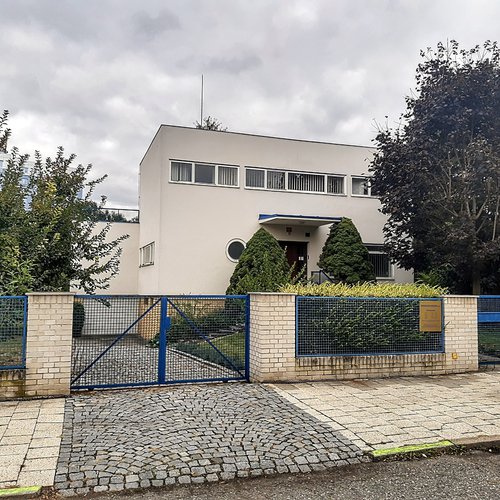 A house made up of two cubes. This basic geometric principle and the design of the facades, as well as the use of the building materials, result in a puristic, highly effective appearance.

The house is situated on a gently sloping site towards the east. The entrance is on the west side. To the right of it is the living room on the ground floor. Inside, the living room is also located in the rear cube of the house. On the southeast side is attached a winter garden with large windows. To the left of the entrance are placed the toilet, bathroom and kitchen, in the rear cube a dining room. A staircase leads to the upper floor. On the west side, the middle windows above the entrance are part of a hallway, leading to other living areas that were formerly used as bedrooms and a workroom. The eastern cube is used on the upper floor as a large roof terrace. The building has a basement. The windows are clearly visible on the lower east side. In the west this basement was used as a garage.

Nowadays the ground floor is used as a doctor's office. The room layouts have been significantly changed. The winter garden is used as a reception. Nevertheless, several original details have been preserved in the house, such as the rubber linings in the hallway and on the stairs. The original windows are also preserved.

The construction is made by hollow bricks, allowing that the wall thickness is only 40 cm. That makes the facade for aesthetical reasons loook more light.

On this website are historical pictures, pictures of the interesting east facade and floor plans.

Built in 1936 for for the malt wholesaler Stanislav Nakládal. Since 2007 there has been a doctor's practice in the house, making the building accessible for the public. 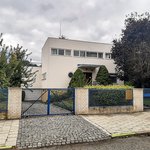 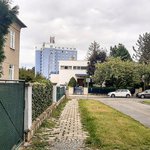 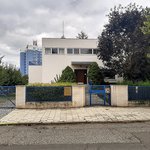 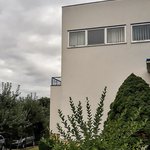