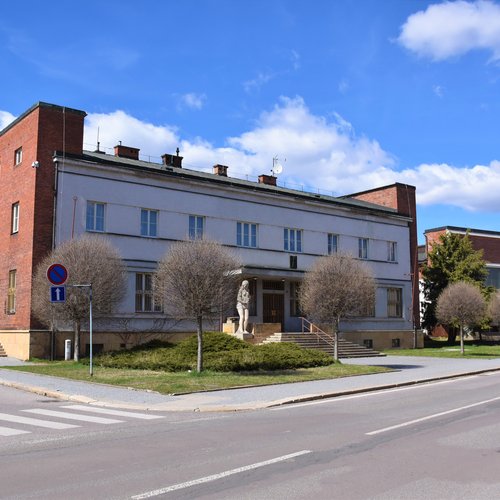 The bank as a part of Lomnice's new town centre.

Some sources tell, that Liska was very much influenced by Josef Gočár's concepts for this building. This refers to the cubic forms, which are also sometimes called constructivist. This can be seen first of all in the building's very compact form. The impression is reinforced by the three-storey building sections of clinker brick and flat roof on both sides. In between Liska designed the two-storey area with a gable roof.

The entrance area is designed almost monumentally. The high staircase leads to two statues. The female figure is an attribute of thrift and diligence, which can be seen in the beehive. This is regarded as a symbol of industrious activity, like the bees, and is intended to encourage bank customers to deposit their hard-earned money in the beehive called the bank. This then produces honey, which is good for everyone. The male figure symbolises work, depicted as a worker and saver.
Inside the building is situated a large counter hall and on the first floor the director's room and two flats. Many original furnishings are said to have been preserved inside.

The wind of the larger city can be felt, while watching this architectural style. This is because the architect Oldřich Liska, who works in Hradec Králové, was commissioned to design not only the Tylovo divadlo municipal theatre in Lomnice nad Popelkou but also the municipal savings bank. Both buildings stand next to each other and thus form a kind of main point of a modern forum within the small town.
The plans for both buildings date from 1929. Construction of the bank building began in 1930 and the building was opened in 1931.
Since 2012, the bank in Lomnice nad Popelkou has had a different headquarters and this building is privately owned and used for various purposes. 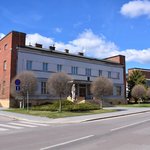 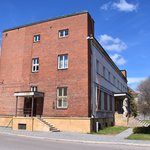 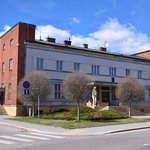 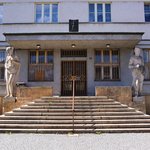 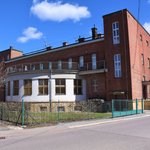