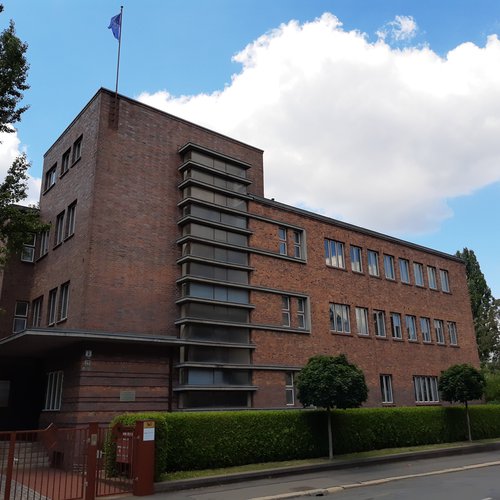 Thilo Schoder's last brick house in Gera, which is build in solid masonry.

A simple building made up of three cubes. The entrance area on the left is dominated by the stairwell windows. These are arranged in a band over almost the entire height. They form the vertical structure of the house. They illuminate the stair case of the building, which leads around an elevator. The concrete window frames of the staircase windows are effectively connected with either the canopy of the entrance or the three double windows to the right of the staircase. The large windows on the north side illuminate the central corridors on each floor.

The clinic was organized on four floors. In the basement towards the street, from the outside, there was a mortuary to the left of the stairwell. The kitchen and the utility rooms faced the street. On the garden side were all the rooms that were connected to the laundry and heating. The building was heated with coal for an internal central heating. On the ground floor was an office next to the entrance, waiting rooms, consulting and treatments were housed on the garden side. Facing the street side the ground floor housed one operating theatre and one delivery room. A notice on the facade to this day is, that there are no windows on the place of these rooms. On the 2nd floor were used the sickrooms on the east and west side, a room for infants and lounges for the nursing staff. On the 3rd floor were placed such called girl's rooms.

The building is masoned and covered with Buca clinker bricks.

Some deatils, like the staircase tower can be observed on other buildings by Schoder, such as the Hospital in Zwenkau.

The gynecologist Dr. Ernst Schaefer opened a clinic for women's diseases. The final building permit was issued on June 4th, 1929. The hospital opened already on January 2nd, 1930. To this day, the building is colloquially called Schaefer's Clinic (Schaefer-Klinik). He supported political persecutees during the Nazi regime in Germany, which is why the hospital was not nationalised after 1945. The hospital remained a private clinic until 1961 (construction of the Berlin Wall and Germany's division).

Nowadays this building is used as an office building. It was modernized in 1993/94 and received the National Heritage Price of the city of Gera. A plaque at the entrance commemorates the architect Thilo Schoder. It says: "Thilo Schoder - most important architect of Modernism in Thuringia. Built as the Gynaecology Clinic Dr. Schäfer in the Bauhaus style in 1929." 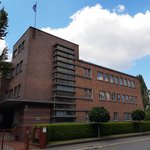 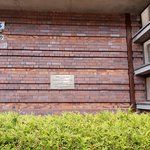 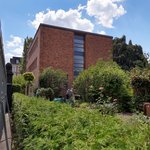 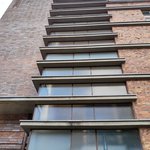 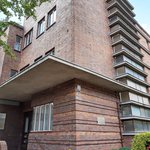