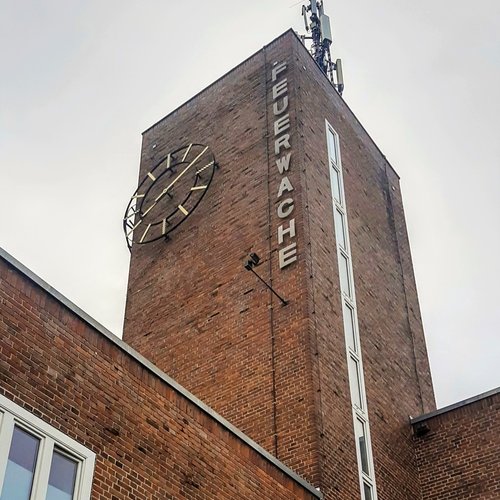 Today's use: Fire station and apartments

When the depot was extended in 1967, the modernist style was respected!

Company flats were built next to the fire station for the fire brigade staff. Two entrances with nine flats on three floors and an attic were built. In the middle of the complex is designed the tower with two clocks and the inscription Feuerwache. Allegedly, the tower was built as a correspondence to the tower of the church Oberkirche St. Nikolai, as both towers are visually connected via Friedrich-Ludwig-Jahn-Straße. First of all this tower was needed to dry the hoses. The depot and the service rooms of the fire brigade are housed in the lower building. The southern extension dates from 1967/68. It is structurally identical to the depot from 1929/30, differing only with lighter clinker bricks.

Nice details are the vertical ribbon windows in the tower and the apartment buildings as part of the stairways.

We do not yet know anything about the construction method. It could be a reinforced concrete construction that was clad with clinker bricks.

As written in the Wochenkurier, the winter in February 1929 was particularly harsh. During this time happened many technical accidents in Cottbus, which led to large fires. This must have been the reason for the construction of a new, modern and large fire station. The construction work began in 1929 and on 29 June 1930 the building was handed over. In order to expand the parking areas for the vehicles, the hall was extended to the south in 1967/68. 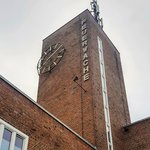 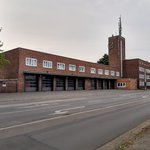 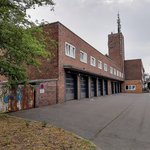 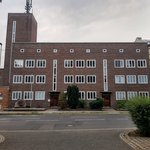 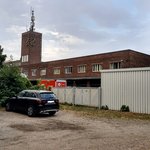 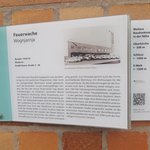 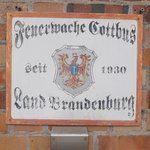