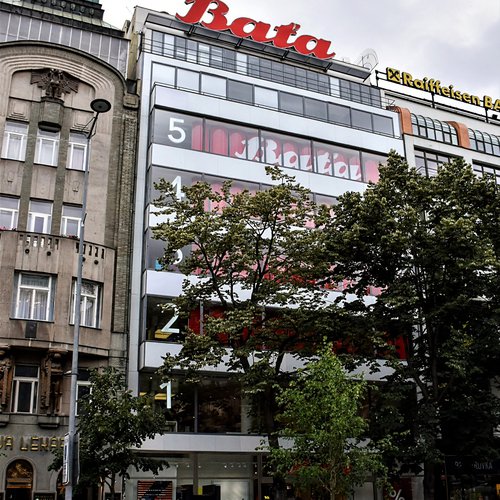 Here we go. This house at Václavské náměstí (Wenceslas Square) is one of most important modernist buildings in Czechia.

Basically, this house consists of the basic construction of reinforced concrete elements. The pillars support the ceilings. This is how the floors are formed. A typical Prague structure is that the ground floor and the first floor are at the same depth. From the second to the fifth floor, the facade emerges slightly as an avant-corps. The sixth floor lies on the line of the ground floor, creating a terrace. The seventh floor is set back a little. The ribbon windows were unusually large for their time and even for the period up to the 1970s. They allow a lot of daylight to enter the rooms. The "rear" of the building at the square Jungmannovo náměstí is exactly the same. In this way, the building achieves a main characteristic of modernism. There is no distinction, whether a facade is "in front" or "behind".

At night, not only the company logo on the roof is illuminated. The large window serve as an advertisement for the company and illuminate the building from within.

On the left side of the building are placed the escalators and lifts.

At the end of Tereza Kovaříková's thesis you can find a lot of pictures.

The building was planned in 1927 by Ludvík Kysela and the Baťa's Building Planning Office in Zlín, Czechia. Jan Baťa bought the property in the same year. The company demolished a classicist house in order to construct this building from 1928 to 1929. First the group was expropriated by the Nazis, then by the communists in 1948. Through the restitution, the house was carefully restored and appears almost in its original state. 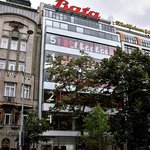 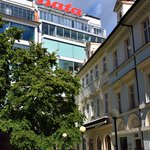 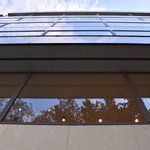 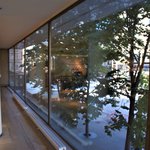 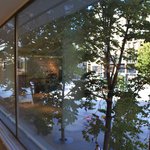 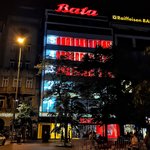