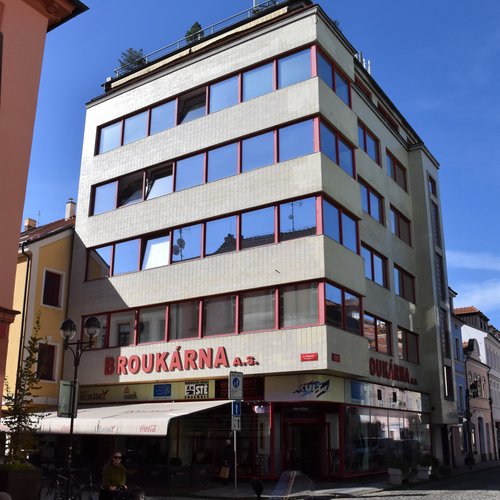 The house looks particularly impressive through the various types of windows.

The ground floor of the house is used for shops and the entrance to the staircase in Široká Street.
Above the architect Karel Chochola designed four similar floors and a recessed top floor. The facade's design differs in the two streets. In Široká Street, the facade alternates between forward and backward. The staircase is slightly highlighted as a kind of avant-corps. Another projecting element is the oriel at the corner. It carries over the design elements of the second facade along Dr. Stejskala Street. Both facade types get together at this point. The backward facade in Široká Street was provided with double casement windows. It is precisely this window arrangement that differs from the other facade in Dr. Stejskala Street, designed with ribbon windows. Hopper windows were often used for the Brouk + Babka department stores. For the presentation of the various goods, the windows have been designed large for an optimal lighting of the interior. The shelves were often arranged under the ribbon windows at B+B. We have no information whether this function was used in exactly the same way in this house, but we assume it.
Like many buildings of the 1920s and 1930s in České Budějovice, the construction of arcaded sidewalks on the ground floor, which are very typical for the city, were not used for the new construction. This marked a hard break in the local building tradition.

The facade is cladded with beige ceramic tiles, made by Zapadočeské kaolinky in Horní Bříza, Czechia. As long as the tiles remain intact, this has the advantage over plaster that the facade does not need to be renovated for a long time.

Since the centre and the blocks of houses in the centre of České Budějovice are built closely to each other, this house does not have a courtyard or a designed rear facade.

After less than half a year of construction, the Brouk +Babka department stores was opened on 30th August, 1935. Large advertising boards with the abbreviation of the company's name B+B were attached to the exterior of the house. After the war, the B+B company was expropriated. The house was thus controlled by the state and renamed Vltavan. However, it retained the function of a department store. Between 1958 and 1987, the building was considered a listed building. The building was renovated at the end of the 1980s. Therefore, it seems that the heritage agency decided to withdraw the designation as a listed building. Since 2019, it has been listed again.

In the past, other businesses were housed in the building. For example, the a pastry shop and a beer bar where the actors of the city's theatres liked to go. The father of the famous Czech actor Karel Roden celebrated the birth of his son here in 1962.

Broukárna is written on the house today. This is the Czech nickname for the former department store's name, roughly meaning the Brouk house in English. 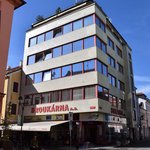 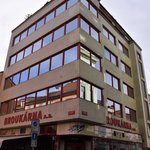 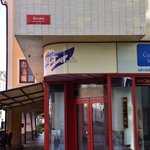 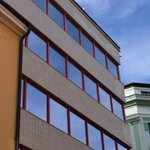 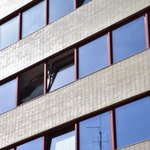 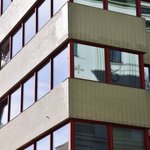 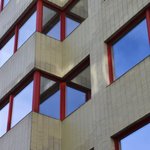 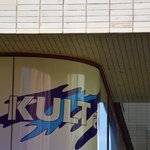 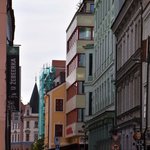