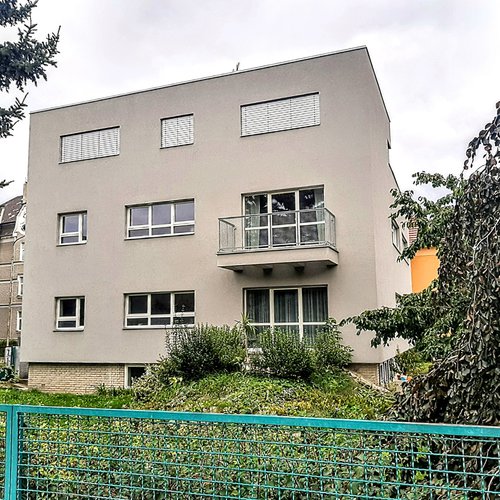 Clearly and simply designed: this house combines many details often used in the architecture of the following decades.

This house is an excellent example of a clear, functional building. On the north side, the house is given prominence with the entrance door and the canopy. The windows above belong to the staircase. Interesting about the window/room assignment on the northern side is that the window bands on the far left belong to different rooms. On the lower two floors, the larger side belongs to the bathrooms, the smaller side to the separate toilet. On the upper floor, the bathroom and toilet were designed in one room, but the smaller part of the window belongs to the bedroom. The separation between bathroom/toilet or two different rooms was often used in the architecture of the following decades. The upper floor has a smaller living space, but a large terrace on the south side. On the two lower floors, the living rooms on the southwest corner and southern side below the terrace are longer, foolowed by bedrooms at the southeast corner. From the living room on the ground floor a door leads into the garden, on the first floor the living room is equipped with a small balcony. The windows next to the living rooms on the west side belong to the kitchens. The lower two floors have identical flats with five living rooms each.

On this website are historic pictures of the interesting southern facade with its terrace and the original interieur.

The house was built between 1936 and 1937. On the top floor was once Lubomír Šlapeta's flat.

It was renovated after 2010 and the exterior is in a very original condition. 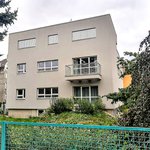 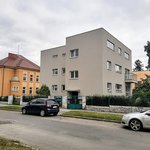 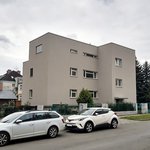