Hans Kroch was a Leipzig banker and a founding and supervisory member of Leipziger Messe- und Ausstellung-AG.

The Kroch banking house had its headquarters in the Krochhochhaus in Leipzig, designed by the architect German Bestelmeyer, which was the city's first high-rise building.

Kroch also financed the construction of the housing estate in Leipzig-Gohlis as the main shareholder of AG Haus- und Grundbesitz. A residential complex of social housing which was soon named after him by the citizens of Leipzig, the Kroch-Siedlung.

In the course of the "Aryanization" of German companies by the National Socialists, Kroch was arrested on November 10, 1938, after the Pogrom Night and deported to the Buchenwald concentration camp, later to Sachsenhausen.

Only when his family renounced all assets of the bank he was released and the Industrie -und Handelsbank AG took over the bank.
Kroch fled to Amsterdam and later emigrated to Israel via Argentina. 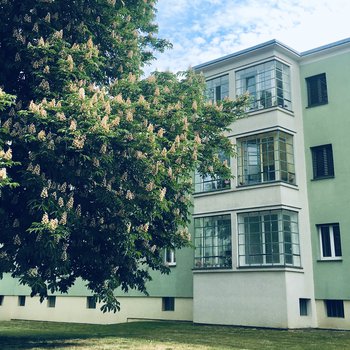