His first internationally known building is the stadium in Florence. After World War II he designed well known buildings like the UNESCO headquarters in Paris (1950), the Pirelli Tower in Milan (1950), the Tour de la Bourse in Montreal (1964), the Hall Paul VI Audience at Vatican City (1971) or the Good Hope Centre in Cape Town (1976).

He graduated from the University of Bologna (department architecture) on 28 July, 1913. Immediatly he joined the Society for Concrete Construction (Società per Costruzioni Cementizie). He started using his knowledge in 1923 and created a lot of concrete constructions, even hangars. He was born at the right time in an architectural sense. The changing construction industry allowed him to apply his knowledge in an almost playful way. His buildings are characterised by a latticework of concrete ribs, seemingly floating roofs and exposed concrete, which also consciously indicates that he wants to reduce costs.

He was also theoretically involved with architecture, published books, taught at universities (including Harward) and enhanced the building material ferrocement. 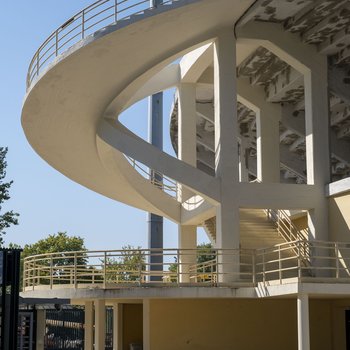