Jaroslav Čermák was a Czech architect and a representative of functionalist sacral architecture of the 20th century.

In Plzeň he studied five semesters at the University of Mechanical and Electrical Engineering and he graduated from the University of Architecture and Civil Engineering in Prague. He gained first experiences between 1929 and 1933 in the studio of Jaroslav Fragner and then with František Albert Libra, Josef Havlíček and Karel Honzík. In 1936, Jaroslav Čermák became the chief architect in the construction company Stalmach and Svoboda. From 1937 to 1948 he worked in the design office "Huť" (medieval masons), which he founded himself for modern sacral architecture and design. After the communist coup in 1948, he worked in the State Committee for Physical Education and Sport and in the Research Institute of Construction and Architecture.

He was an active Roman Catholic, member of III. Order of St. Francis. The impetus for Jaroslav Čermák's work was the idea of ​​Bishop Antonín Podlaha to build as many churches in the outskirts of Prague as the halo of the Virgin Mary had stars from the demolished Marian Column in Prague's Old Town Square. That means 12 churches according to the 12 stars of the halo. Čermák realised two churches from this programme, the functionalist church of St. John of Nepomuk in Prague-Košíře, including interiors, where he largely applied religious symbolism, and the wooden church of St. Francis of Assisi in Prague-Krč.
Also churches outside of Prague were built according his designs. Besides churches he designed only one functionalist villa in Prague-Dejvice.

His buildings are characterized by clean, simple lines, a high prismatic tower topped by a bell tower, or a well-visible cross of simple shapes. Towards the end of his creative period, cubist elements appear in his work. He was inspired by the work of the German architect Rudolf Schwarz, who was considered "a great mystic and a pioneer of the newly understood liturgical space". 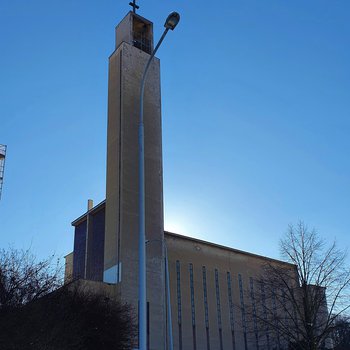