After an internship as a carpenter, Eduard Lanz studied architecture at the ETH in Zürich from 1905, diploma 1911.

He worked as a construction manager in Basel and from 1916 in Berlin, where he joined Bernhard Möhring, one of the most important architects of the Jugendstil style in Germany. From 1917-18 he was a master student and architect under German Bestelmeyer. In 1919 he joined the SBB (Schweizerische Bundesbahnen AG) construction office in Basel, for which he built the locomotive shed in Biel/Bienne from 1922.

Self-employed from 1924, he realized mainly cooperative housing - partly inspired by the German garden city movement - as well as the Volkshaus in Biel in 1930-32, which is considered his main work.

As a member of the Socialist Party and a follower of the religious socialism of Leonhard Ragaz, Lanz was involved in politics. He was on the board of the Swiss Association for the Promotion of Non-Profit Housing and supported the founding of housing cooperatives.

From 1928 he was a member of the Association of Swiss Architects. 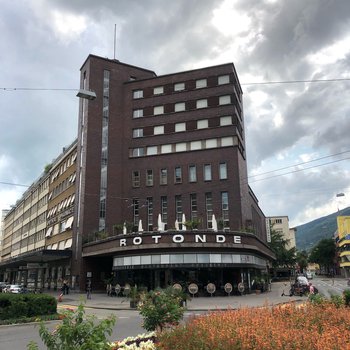