His aim in building houses was to create good living spaces for people, to choose colours that enhance well-being and, of course, to let a lot of light and sunshine fall into the rooms. His main inspirations were the work of Frank Lloyd Wright and the Dutch De Stijl movement. After completing his masonry apprenticeship, he studied at the Berlin Baugewerbeschule from 1905-1908. He cooperated with Hans Scharoun, was member of the group "Der Ring". In 1919 he became teacher in architecture at the State Academy of Arts and Crafts (Staatliche Akademie für Kunst und Kunstgewerbe) in Wrocław (back than Breslau), where until today a lot of his buildings can be found. In 1924 he became proffessor and exerted a great deal of influence on the teaching at the school, which existed until 1932. He also participated in the "Weissenhof-Siedlung" in Stuttgart. In 1928 he got divorced from his first wife Anna Silber and shortly after he married Else Leschnitzer. Through her mediation, the Rabe's House in Zwenkau was carried out. Because of the political situation in Germany he went in 1933 to France and in 1935 to Palestine. He became city building coucillor for Haifa in 1943. In 1950 he settled over to the UK and got an admission to the Royal Institute of British Architects, the Royal Town Planning Institute and the Institute of Registered Architects. Four buildings of private houses are known from his in the UK. 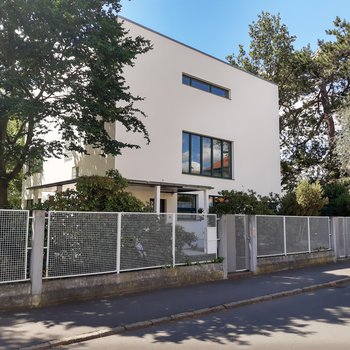