After his studies at different universities he opened his own architecture office in Prague in 1908. He was familiar with the city, because his parents moved there with him when he was a small child. They were part of the German-speaking minority in Prague.

He did not belong to any political camp during the period of national tensions between German- and Czech-speaking inhabitants of the Czech lands and was loyal to Czechoslovakia, which was founded in 1918. But his German-speaking background made it difficult for him to realise projects for Czech clients in Prague. He therefore concentrated on German-speaking clients. Besides Prague he also designed buildings in a mostly neoclassical style in Olomouc and Karlovy Vary.
In addition to many residential buildings, he worked as an architect for the Dunaj/Donau insurance company.
He was probably rather ignored by his Czech colleagues and also rather marginalised from Czechoslovak art history between 1945 and 1989. 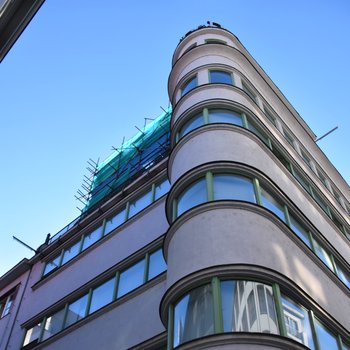