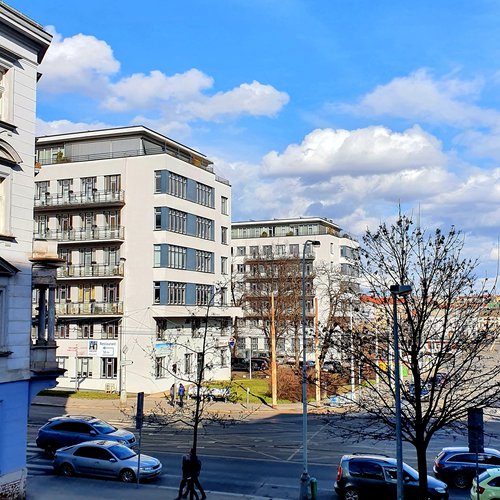 Improving the life of single women.

A report of the National Heritage says about this building: “Excellent functionalist building with a remarkable division of materials and some parts of the facades [...], with preserved original elements [...] and interior. An important document of a stylistically distinct functionalist solution, proving the high level of Prague's interwar architecture [...]. It was built to improve the housing situation for single women."

The original six-storey H-shaped building of reinforced concrete skeleton was built in 1933 in the functionalist style according to the design of the architects Josef Hlaváček and Vlastimil Lada on the site of the former Smíchov gasworks. The house had a total of 900 rooms, also three large halls: a theatre, a gym and a movie theatre with a restaurant (It is not clear, whether the restaurant was a restaurant to the public or rather a canteen). According to the original statutes, flats were provided to women for only two years. Between 2002 and 2005 the building has undergone a number of modifications to the exteriors and interiors, with changes of the layout of the interiors and the design of the facades. Today the building is used for offices, surgeries, theatre, relaxation centre and a restaurant. In 2004, another floor was added to the Women's Homes building according to the design of architect David Bartoušek, which serves as a hotel.

The building was created on the initiative of the association "Board of Trustees for Improveming the Housing Conditions of Young Women" (Kuratorium pro zlepšení bytových poměrů mladých žen) under the patronage of Alice Masaryková, who inaugurated the building in 1933. Alice Masaryková was the daughter of the first president of the Czechoslovak Republic. She and the association tried to put the section 106 of the Czechoslovak Constitution into practice, which stated that "women are politically, socially and culturally equal to men". Women's homes were to serve as an example of solving the housing situation of young single working women, especially those from outside Prague.

During the Second World War the building was used as a military hospital for German soldiers.

After the war, the former inhabitants returned to Women's Homes, of whom up to 1,400 women lived in 850 rooms. But contrary to what was originally thought, some women lived in this building from their youth until their retirement. However, living conditions were rather crowded given the small size of the rooms. 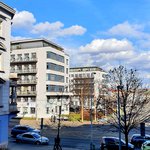 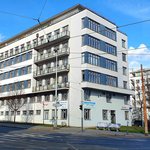 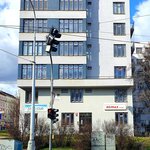 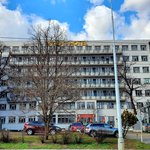 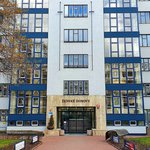 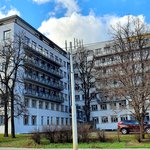 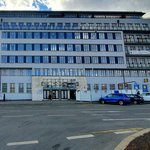