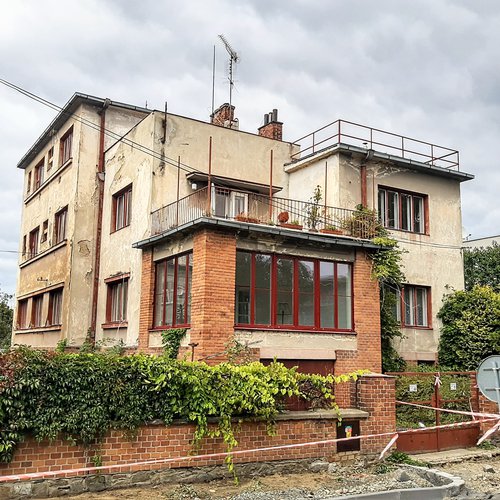 Cube shapes over cube shapes on this house. Just to start, the first cube is the part of the house's garage in the elevated basement and the wintergarden above. The winter garden's roof is used as a terrace. The two windows next to the winter garden and terrace are part of the next cube with the kitchens. The round windows on the east facade are part of these kitchens as well. The elevated basement houses next to the garage and a boiler room one little flat.

A second floor for living is situated to the north. In Czech this part of the house is called přístavba, that means extension or annex. Unfortunately, no year of is named for this extension. The word evokes that this part of the building could have been built later. The stairwell with the entrances to the five apartments is located in this extension. Since the house is referred to as a villa, it would be possible that it was initially inhabited by only one party. For the house's conversion to five flats, meaning that the house is no longer a villa, the stairwell with the surrounding rooms could have been added later than in the year 1930.

The thesis "Návrh rekonstrukce vilového domu" by Marie Staňková from 2017 is posted on the internet with photos of the present condition of the house and ground plans of all flats.

The house was built in 1930 by an engineer called Karel Štajgr. The house went into private ownership in 1974 and has been gradually reconstructed since then. It is currently for sale. 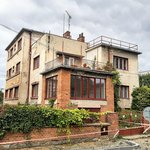 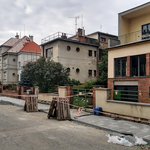