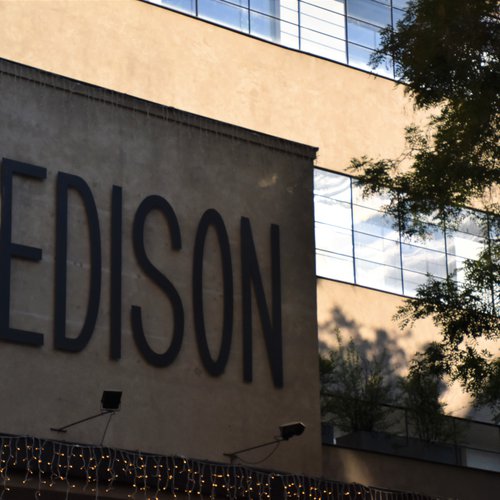 Today's use: cinema, offices and apartments

The ground floor zone along Jindřišská Street is larger and is equipped with an awning, that covers today the entrance zone of the cinema and café. The facade of the first to fourth floor is set back of the ground floor. The higher floors are designed with large window areas that were typical for industrial buildings. On the left side, a cube rises from the ground floor to the first floor, asymmetrically staggering the building and making it look even more interesting. On the shorter side of the building on Jeruzalémská Street is the building entrance, the staircase and some more windows.

Power System is meant ambiguously. On the one hand, this transformer station belonged to the Prague power supply network. As the demand for electricity grew in the 1920s, such stations within the city were gradually expanded. This station was entrusted to the architect Libra, who had already designed several industrial buildings in Prague.
The ambiguity of the title refers to the building itself. It is one of the first functionalist buildings in the city, of an internationally significant architectural standard. Prague Electrical Enterprises were pretty brave, as the transformer station is located between historical buildings.

Construction of the station began as early as 1926. In 1930, a luminous installation, called Edisonka, was placed at the entrance, which unfortunately has not been preserved. It was designed by Zdeněk Pešánek and is considered as the first so-called kinetic sculpture in public space. It was reconstructed in 1995-96 and is exhibited by the Prague National Gallery. The gallery is campaigning for the installation to be reattached to the building.

Almost a dream came true that the building has been preserved. The renowned Czech architect Ladislav Lábus was responsible for the renovations and reconstructions between 2005-07. They tried to restore the house as faithfully as possible and, for example, to reuse windows that were still in very good condition. The building was given a roof extension, but all in all it is not disturbing the look. Today, the building is used as a cinema, for offices and flats. 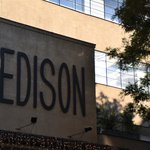 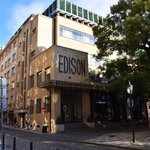 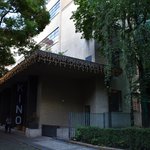 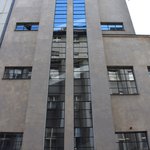