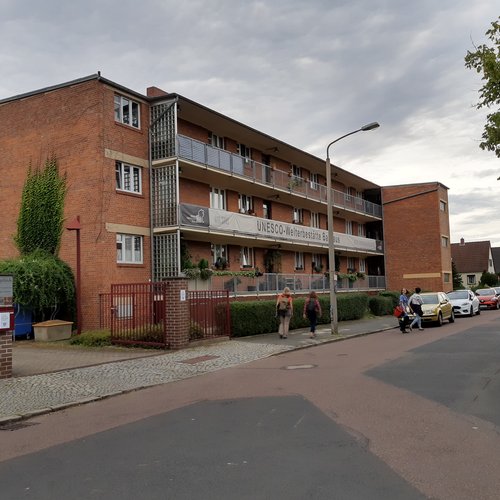 What is considered a tiny flat today was worth a lot to a poor family in 1930.

Hannes Meyer planned these houses as an extension of Walter Gropius' Törten housing estate. To save costs, only one stairway was planned for each of the five blocks. From there, balconies lead to the flats. These balconies also save material because they are on the outside.
The balconies are on the north side. The kitchens and bathrooms in the flats are located on this side. On the south side are located the living rooms and two more rooms. This can also be seen on the southern facade. The larger windows belong to the living rooms, the smaller windows to the bedrooms and children's rooms. Each flat has a living area of 48 sqm. This short video shows a flat explains its function and functionality. On the south side the tenants once had little gardens. These are no longer in use today, only a kind of courtyard with the washhouse.
Since there was little storage space available in the flats, and moreover there are no cellars or attics, storage boxes under the balcony on the ground floor were fit. They are still in use today.

In contrast to the white plaster facades of Walter Gropius, Hannes Meyer opted for pure brick facades, whose decoration are the continuous concrete strips.

Planned in 1929 and built in 1930 for low-income residents. Single-family houses were to be built between the five blocks to mix the social classes. In the end, only the apartement houses were realised in this location. Today, one person usually lives in one of the 90 flats. Originally, the flats were planned for families of four and were very affordable.
The balconies, used as entrances to the flats, are also a place for sitting and chatting, so they have a social character for the residents.
Since 2017, the houses have been inscribed on the UNESCO World Heritage List. 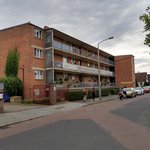 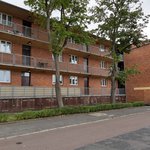 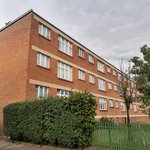 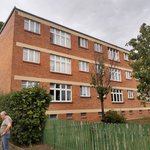 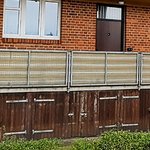