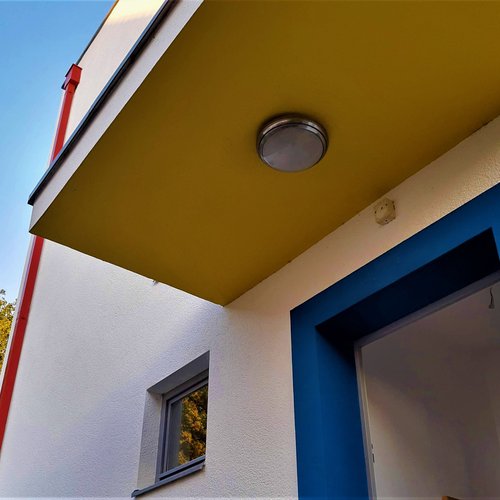 In Leipzig it is one of the brightest and most modern single family houses.

The plot of land only allowed a width of 8 metres. Therefore, the house was built rather in a east-west direction. The building is composed of several cubic forms. Towards the street to the east, the house with its three storeys is fronted by an oriel. The main entrance is on the north side, where the smallest windows of the house are arranged because of the compass direction. On the south side, the current owners had the long window band installed in order to also make better use of the south side.

The ground floor consists of a large living room area that also leads into the oriel. A kitchen faces west. From there, a staircase also leads to the garden.

On the first floor are all the other rooms.

The second floor opens towards the west as a terrace with a railing. The superstructure leading to the terrace was added after 1994.

The plans for this house date from 1930. The current owners bought the house in 1994, which had been used by two families before. The renovation started in 1996. Today the owners live alone in the house. They also installed the ribbon window on the south side. There were originally no windows on the southaern facade. This also gives the ground floor more lighting inside and a new axis. This window band is exactly opposite the main entrance on the north side. The windows of the living room to the east find their counterpart on the west side with the balcony windows that lead to the garden. This creates a cross from all windows and incidence of light that has its centre in the living room. The originally open terrace was glazed during the renovation works, so that a veranda was created. On the originally large roof terrace, a further roof floor was added on the east side.

The Heritage Trust did not find any paint residues in the living rooms, so that the inside of the house could be designed according to the needs of today's residents.

They also liked the basic colors red, blue and yellow, a symbol of the Dutch school De Stijl and the German Bauhaus. The main entrance door is painted blue, the canopy above it in yellow. The downspouts became angular shaped with the modernization, that differs from the original. The owners are Bauhaus fans and found inspirion by similar downspouts at the master's houses (Meisterhäuser) in Dessau. They have been painted red. 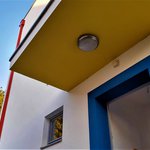 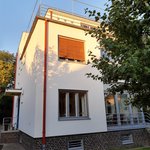 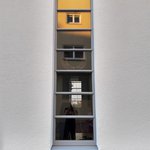 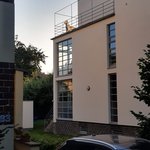 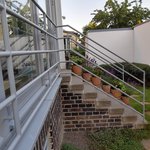