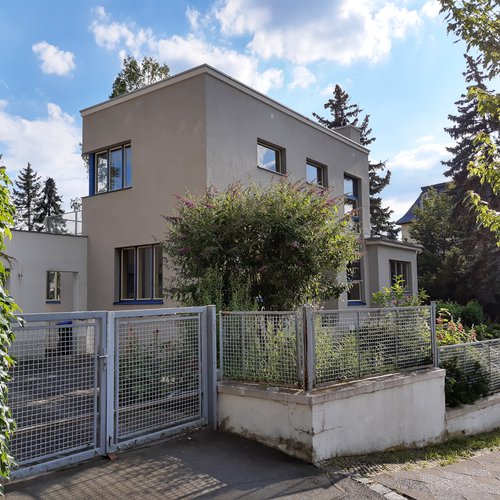 This house is Schoder's last complete project in Gera.

The house consists of solid masonry with plaster. It is characterized of a typical purism. White facades, the windows sit in straight cutouts, the base slightly offset. The window frames for all rooms were made of wood, never metal. There are two terraces on the garden side. One on the ground floor is covered, the other one on the first floor is open. The large windows of the house face east and south, the smaller windows face west (street) and north. Towards the street, the toilet is on the ground floor to the right of the main entrance and the kitchen on the far right. Rudolf Sparmberg's study was originally located to the left of the front door. He worked as an engineer. From the street you can see the corner window next to the terrace on the 1st floor. The former women's room on the ground floor and a a sleeping room on the first floor have such corner windows as well. These window shapes are a main element of Modernism in Architecture. They reinforce the impression that the facades are not very heavy. In contrast to the windows of the living rooms, the stairwell windows, which are clearly visible next to the entrance area, were constructed with metal frames. The highest point of the house is the chimney of the fireplace. The entrance niche was originally larger, reaching to the left side. In 1936, the niche was reduced in size so that only the door remained in it and a window was inserted on the left side next to the door.

The building permit was granted on August 20th, 1930. The building plans date from the same time. The house was ready in April 1931.

The current owner of the house Katharina Wünscher received the first German Federal Prize for Crafts in Monument Conservation in Thuringia (Bundespreis für Handwerk in der Denkmalpflege in Thüringen). The restoration studies revealed that the building was fully preserved under the layers of paint and wallpaper. The colour of the window frames was also reconstructed true to the original. When the renovation work was completed, the exterior plaster was applied again as a light gray high-quality mica plaster. 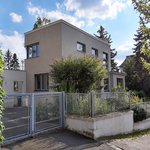 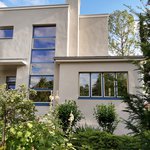 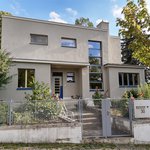 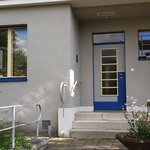