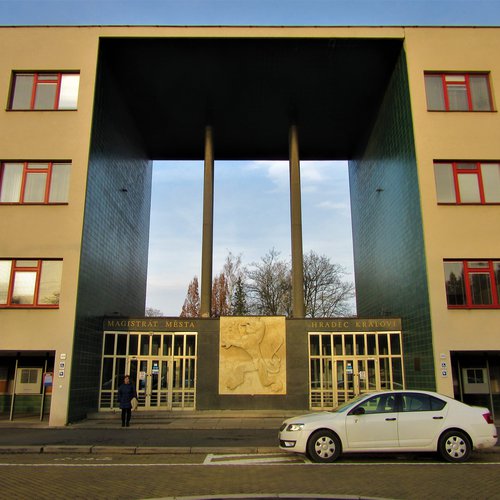 The building is H-shaped. The construction consists of a reinforced concrete skeleton with bricks as filling material. The white facade is a lime plaster. Originally it was the seat of the district office, from the main entrance the left part in the northwest, and the tax office in the right part, towards the southeast. The main entrance is part of a area looking like a triumphal arch in the middle. The two columns , typical for Gočár's work, are impressively presented, as they achieve their particular effect at this point due to the height. This area is particularly highlighted by the green tiles. The entrance forms only a ground floor zone. The roof above it symbolically spanned the both administrations. Corridors lead from the central three-storey building to the two symmetrically situated four-storey buildings, which adjoin at a 90-degree angle.

A Japanese garden was planned in the inner courtyard as a connection with the nearby parks of the city's circuit. The garden has never been carried out because the two offices could not agree.

A sandstone sculpture completes the entrance. It shows a lion, the heraldic animal of the Kingdom of Bohemia and Czechia. It was created by Vincenc Makovský, one of the most important Czechoslovak sculptors before and after World War II.

For more details and information about the interior and what the local press wrote about this building. 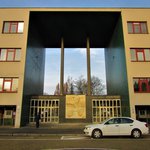