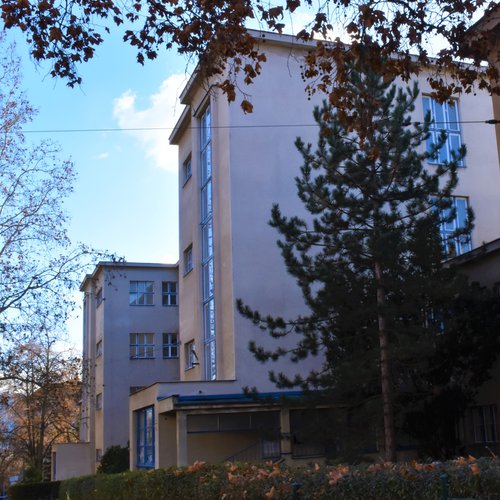 Two entrances on the north-east side lead into the school, whose corridors and rooms are very well lit by the many windows.
The school's gym is an independent building in the southeast.

The first plan for this school were made by Gočár in November 1926. We do not know yet, when the construction work began. The building was completed in 1930.
The school is called a "minority school", because until 1945 Czech-speaking natives in Ústí nad Labem were a minority among a German-speaking majority. One of the most important Czech architects was chosen to built this school. It was one of the first functionalist buildings without any ornamentation in order to emphasise the modernity of "Czechness" in the Republic. Symbols of a nation can be a language, hymn, flag or a coat of arms. In front of the school, between the two entrances a coat of arms was erected as a symbol of the Czechoslovak nation. This coat of arms was intended to express the presence of the state and that the Czechs believe in this country. Czechoslovakia was not fully accepted among the German-speaking population, as they had been considered a minority in Czechoslovakia since 1918. Within the Habsburg Monarchy until 1918 that was totally different, because they were the majority in Austria-Hungary.

The school was criticised in some German-language sources. On the one hand it appeared very large and it was described as a palace, and on the other hand it was financed with tax money, why the German-speaking residents did not want to support the construction of a Czech school.

Today the school is used as a primary school (Základní škola). 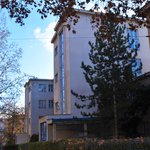 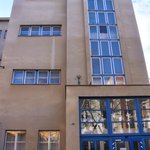 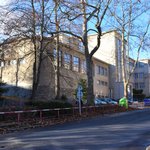 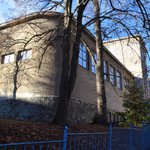 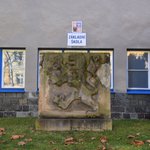 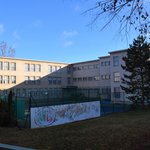