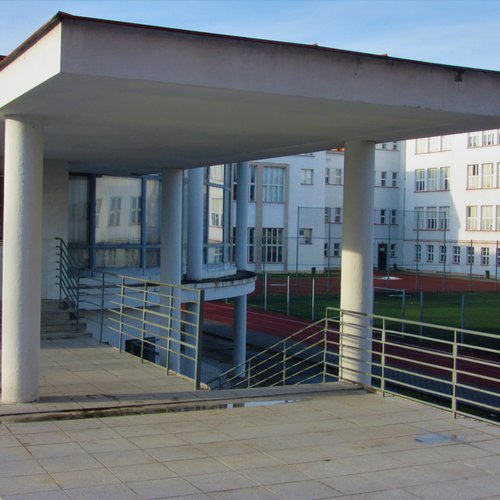 Josef Gočár planned new urban districts in Hradec Králové and he designed this kindergarten to fit into the surroundings.

The kindergarten was placed exactly between two school buildings. The two terraces architecturally connect the kindergarten with the schools. The main entrance of the building faces southeast. The architectural highlight is the northwest facade. A semicircular structure that houses the kindergarten rooms in the upper area was designed in such a way that every child can also always see a piece of the sky at every point in a room. The large glazing allows a high incidence of light, another premise of the new architectural tasks of the 1920s. In the place of today's glazing was placed an open area that was used as a terrace and rooms behind as playrooms. In warm weather, the windows could be opened completely. To both sides of the central part are attached sun terraces with conrete awnings. Stairs are leading from there the sports field. Both the main entrance and the semicircular part of the building feature the typical Gočár round pillars. For the construction was used reinforced concrete with load-bearing brick walls. Originally, a 15-metre-high chimney towered above the roof, of which only a small stump remains. With this chimney, the school looked almost like a steamship sailing on the nearby river Elbe.

The first plans for this building date from 1925. After some changes the construction works began in 1927 and were finished in August 1928. The location of the kindergarten corresponded to the ideal ideas of the architect Josef Gočár. He used his experiences from a trip to the Netherlands in 1924. There he became acquainted with the concept of "open schools". The complete opening of the windows of the semicircular rooms symbolise the opening between interior and exterior space and the turning towards nature. The most impressive architectural element are the semicircular part and the terraces on the left and right of the building with their concrete awnings. They were intended for sunbathing and relaxation on fresh air. These awnings and the flat roof of the whole building are the first example of modernist school architecture in Czechia. Likewise, the location of the kindergarten in this urban area reflects the new ideas for the school system. The main entrance on the southeast side functions as a direct passage into the large park next to the river Elbe. The motif that every child needs nature and greenery has been implemented by Gočár. On the other side, every child has direct access to the sports field, which is also used by the school children. The architect with this connection pursued the demands for sufficient movement and physical education. 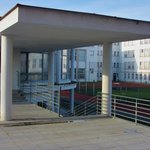