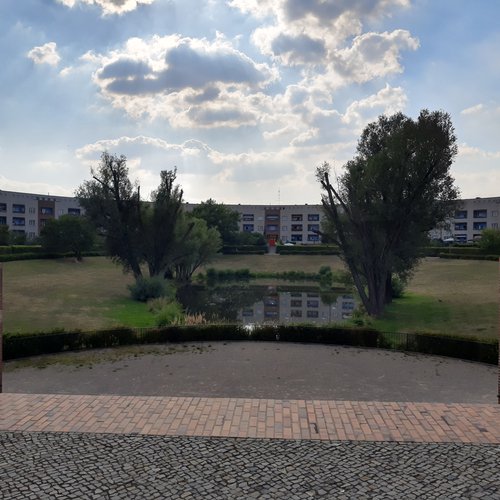 Bruno Taut wanted people to live safe and healthy, but above all happy. An expression of happiness are the intense colours he used in this settlement, but also for many other projects. When walking and discovering, this colour experience is certainly noticeable for everyone.

Martin Wagner was responsible for the construction of modern buildings in Berlin with 140,000 apartments. He worked with Bruno Taut, a visionary architect who wanted to improve the quality of life for people in cities. A basic principle of his ideas is the use of colour, of intense colours. Many houses, for example in the northern section of Fritz-Reuter-Allee and the single-family houses in the central areas, are painted dark red, blue or yellow. Leberecht Migge was the landscape architect who took care of the public facilities, private gardens and trees, which differ in the sections.

Typical for the houses of Bruno Taut and the pioneering architects of the time is that they attempt to dissolve the previously known contrast between street and courtyard, inside and outside, front and back. This means that a house can have a display facade from all sides, depending on its function and location, whether it faces the street, the courtyard, "front" or "back".

The two main axes of the large residential area are Parchimer Allee 7-63 and Fritz-Reuter-Allee 2-120.

7 construction phases were realized between 1925 and 1933. However, only 6 construction phases, sections 1-6 have been a UNESCO World Heritage Site since 2008. Almost 2,000 apartments were built on 37 hectares. You should plan at least 2 hours for your visit, because the whole housing estate is large and varied. There are multi-family houses along the main axes and the "horseshoe" around the pond itself. Between the surrounding main streets (Fritz-Reuter-Allee, Parchimer-Allee, Paster-Behrens-Str., Stavenhagener Str.) there are single-family houses. The individual areas of the settlement differ greatly. Neither modern materials nor modern technology were used during the construction time. The masonry is made of brick, only standardized doors and windows and the same floor plan types reduced the costs. In the end, the financing was not enough and loans had to be taken out. That is why rents rose and instead of poorer people, who should have lived here, employees, civil servants and craftsmen moved in.

Construction phase I is located in the north between Stavenhagener Str., Fritz-Reuter-Allee and horseshoe (Hufeisen) in the south. Construction work began in 1925. The apartment buildings in the main streets all have flat roofs. The two blocks between Hufeisen and Stavenhagener Straße are painted red and delimit the settlement like a medieval city wall. The horseshoe is in the centre of the northern part. In the middle of the horseshoe is the pond. When you enter the inner courtyard of the horseshoe or see aerial photographs, you may think of an ancient theatre in its elliptical form. The opening in the complex where the staircase is located could mentally be the entrance to an ancient site whose closed form has not been preserved. The houses in this small park have terraced gardens that lead to the residential houses. On the lowest "terrace" there are apple trees, on the middle terrace there are cherry trees. The third terrace was not assigned an exact tree species. The gardens should be used for self-sufficiency with fruit and vegetables.

As in all three-story houses in the complex, the Hufeisen also has 1.5, 2.5 and 3.5 bedroom apartments. All living rooms and kitchens that have balconies face the gardens. The apartments in the single-family houses are the largest. They have 3.5 bedrooms with a width of 5 metres or 4.5 bedrooms with a width of 6 metres. Although there are only these two house types, Taut succeeded in using the different colors (red, blue, yellow, white) and the group-wise, staggered construction, so that the streets with the single-family houses do not appear monotonous.All single-family houses in Section I, that are the streets Hüsung, Liningstr. and Miningstrasse still have pointed roofs. They show very well that Bruno Taut was familiar with historical styles and that in 1925 the principle of the classic garden city was still applied.

The Stavenhagener Str. in section I was designed by Martin Wagner. It differs because the facades facing the street are only painted white or yellow.

Sections III, IV and V from the years 1927-1929 lie to the west and are not directly connected to the remaining sections. The long blocks on Parchimer Allee, Buschkrugallee and Grüner Weg. The northern section at Buschkrugallee got the balconies at the rear. On Parchimer Allee, on the other hand, the balconies face south, i.e. the street. The southern part, south of Parchimer Allee, is called the "Britzer Dreieck (the Britz triangle)". It was very unusual for modern urban planning at the time that the complex was closed like a block in the shape of a triangle.

In our view, Section VI is the most successful in terms of the aesthetics of modern construction. Bruno Taut had plans to develop an even larger area towards the south. The result is a smaller area south of Parchimer Allee, bordered by the streets Paster-Beherens-Str., Talberger Str. and Fritz-Reuter-Allee. The houses along Parchimer Allee 67-91 have three floors and are mostly painted red-white. They are the head buildings from which the narrow footpaths to the terraced houses are connected to the south. Due to money problems, the houses in this part are all built lower. On the footpaths, the terraced houses can always be reached from the east. All inhabitants walk through their garden. There are no doors on the western side. Up to Talberger Straße there are more row houses, interrupted by Gielower Straße. In contrast to the detached houses in the northern part of the settlement (construction phases I and II), all row houses have flat roofs. They are built in a direct row, without dislocations. However, Taut achieves with the colour coats of the houses that the atmosphere in section VI does not appear monotonous. In addition, all footpaths are slightly curved and do not run straight. In Gielower Str. the are standing the higher corner buildings of the footpaths of Parchimer Allee and Talberger Str. In the first two western rows the corner buildings are three storeys high. The 3 remaining corner house pairs to the east are two-storey. This creates a transition to the higher buildings in Paster-Behrens-Str. The houses in Paster-Behrens-Str. and in Fritz-Reuter-Allee 98-120 are three-storey apartment buildings with dry floors, which frame the single-family quarter in a classical way.

On the eastern edge of Fritz-Reuter Allee (No. 97-119) follows construction section VII, which was built in 1932/33. Due to lack of money only simple apartments with small flats between 32 and 45 square metres could be built. These 3 blocks do not belong to the Unesco world cultural heritage.

Building sections I-VI belong to UNESCO since 2008. The housing estate has been under monumental protection already since 1958. Since the 1980's extensive renovations began and since 2007 the association "Freunde und Förderer der Hufeisensiedlung Berlin-Britz e. V." has been advising the residents. This is because all the residents of the single-family houses are owning their houses and are responsible for the refurbishment themselves. Since the condition of the settlement was very good, many original details, such as trees, doors and windows were still present, this settlement was inscribed in the World Heritage List.

An information station (INFO STATION) with a show flat from 1925, with a short history about the housing estate and its inhabitants as well as a café is located at Fritz-Reuter-Allee 44. It is open on Fridays and Sundays afternoon. For further deatils see: http://www.hufeisensiedlung.info/foerderverein/projekte/cafe-und-ausstellung-in-der-info-station.html

The provide the brochure about this housing estate and the other UNESCO-sights in Berlin: https://www.stadtwandel.de/artikel_9569.ahtml 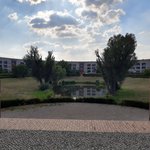 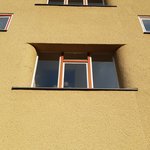 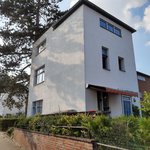 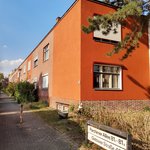 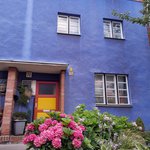 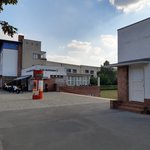 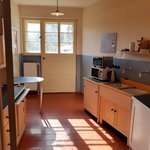 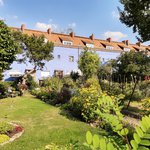 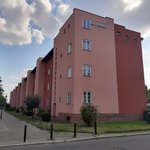