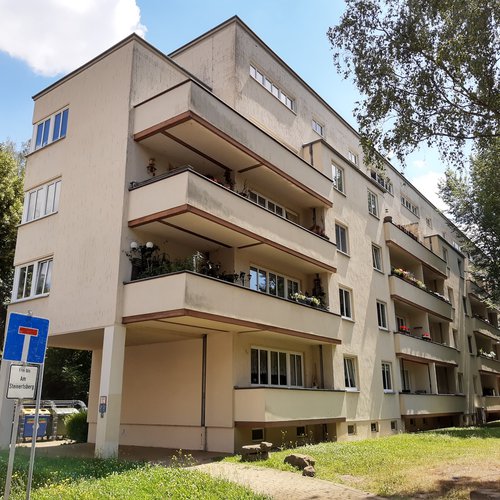 This project was planned as the biggest housing estate with 300 flats for the city of Gera. However, only 44 apartments were built.

The residential buildings were not built as steel skeleton structures, as Schoder intended, but traditionally in massive brick. The two residential buildings are adapted to the moderately rising terrain. The residential blocks have five floors in the lower part of the slope, and only four floors in the upper part. This creates an exciting rhythm of the buildings. The top floor, which was never used, because it was to low. The houses are perfectly stretched in a north-south dimension. Kitchens and balconies face west, stairwells and bedrooms face east. The west sides with the living areas are horizontally structured. The staircases on the east sides, however, emphasize the vertical orientation. The bracket-like balconies at the northern and southern ends of the two blocks, that run around the corners, are a striking stylistic element of the architecture of that time .The northern parts of the buildings stand on reinforced concrete supports, so that there is a passage on the ground floor. All apartments on this northern side have one more room than all other flats. In the south, the balconies protrude far beyond the facade and give the building something expressive.

In 1930, the Deutsche Wohnungsbaugesellschaft Erfurt mbH (German Housing Association Erfurt) commissioned the architect Thilo Schoder to plan a housing estate of 300 apartments, spread over several blocks and individual buildings. The idea was a concept of typed buildings and two large, green inner courtyards. The construction began in August 1930. This project could have become the largest and most modern residential complex in the oeuvre of Thilo Schoder. However, until September 1931 only two blocks with 44 apartments were built and no further buildings followed.

In 1995 the two blocks were modernized. The bathrooms were enlarged and one room was made from two former bedrooms. Also the top roof and parapet of the former top floor rooms were raised by 30 cm in order to gain more space and to insert 6 more apartments.

Original construction documents are missing, as the entire site (with the adjoining barracks?) belonged to the Soviet Army until 1992. 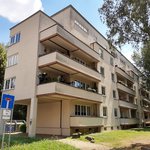 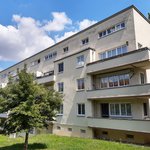 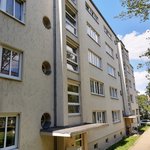 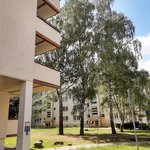