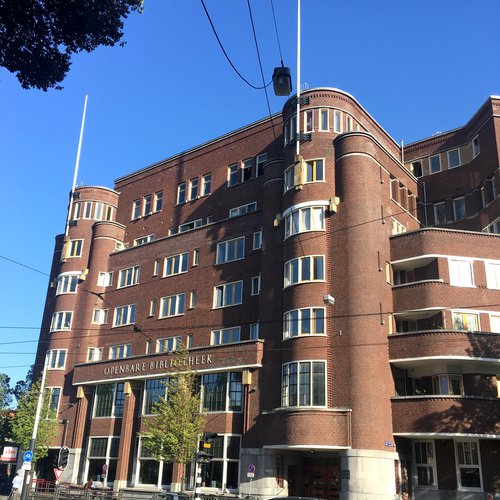 An apartment building with a basement, first floor and six floors of different heights was built on a largely U-shaped ground plan with sloping sides. The building volume is composed of block and cylinder forms. On the back side there is an annex to an open courtyard. The whole is finished by a combination of flat roofs with a slightly projecting roof edge. Standing brown brick masonry with horizontal and vertical articulation on an undulating natural stone base with bossed blocks and wrought iron railings at the bent transitions. The windows above the base have sandstone frames. The symmetrically designed NW facade with its prominent rounded corners on Roelof Hartplein has thirteen bays. The north wing and part of the south wing are mirror images of each other. However, the longer south wing - with post office - is more substantial and extends further with two facades on Gerard Terborgstraat. Thus, the building consists of five facades on the different sides of the street. The tall square bell tower with narrow windows in the masonry and with four dials and natural stone cladding is located in the northern side wing. The northern and southern side wings eventually connect to the residential buildings on Roelof Hartstraat and Gerard Terborgstraat, respectively.

On the inside of the U-shaped building block, centered behind the main building, is the conservatory-like extension of the former residents' dining room. This addition consists of a rectangular structure and a five-sided apse. The rear facades have simple windows with transoms or pivot windows, and some have balconies with French doors. The NE facade on the Roelof Hartstraat side has four storefronts on the first floor. The middle part of the wing is raised. On both the left and right sides rounded transitions to and terminations from lower parts of the building. On the first and second floors there is a continuous balcony with a brick parapet. Simple windows with top-hung sash in a largely symmetrical arrangement per building section. The NW facade on the Roelof Hartplein side has a symmetrical structure and fenestration. The central section is three window axes wide and has bay windows on the ground and second floors. On the second floor these have a multi-pane link window infill. The second floor has a balcony with a brick parapet. The fifth and sixth floors of the central section are set back. On both sides, the facade is flanked by circular risalites, each with two narrower circular siderisals on a high natural stone base. These contain the central entrances, behind which are the central halls, curved window sections, natural stone accents, and a taller, rounded central section with narrow windows and a flagpole. The adjacent façade on the south side has two storefronts on the first floor with stained glass windows in the tall clerestory windows. The rest of the articulation and division is much the same as the NE façade. The facade of the south wing widens further into Gerard Terborgstraat after an in-and-out sculptural corner section. The brick parapets of the balconies on the first and second floors are continuous in the plane of the facade and also extend over the rest of the wing facade.

On the first floor is the central entrance to the bike shed. Glazed floor slabs with rectangular glass blocks were installed to expose the basement areas. The attic is set back and has a gallery. The easternmost section of the south wing has the wide post office windows on the first floor. The sandstone mullions rest on the natural stone lintel. The window infill is further divided by steel bars. The entrance to the post office is on the right side. There are rocker windows at the top of the windows. The facade is recessed on the first, third and fifth floors. The gable ends with a sculptural rounded pediment on the right side. The simple windows are balanced in different types across the facade.

The wooden ceiling in the dining room and adjoining rooms is original, as are the doors and the partition between the respective dining rooms. The apartments are grouped on both sides of long corridors. Staircases with expressionist railings and windows with stained glass panels connect the floors. The central staircases emanate from two central halls in the Roelof Hartplein section of the building. These halls also have marble floors and wooden entrance doors and paneling.

Inside Gerard Terborgstraat No. 46, some parts of the original furnishings of the post office on this side have been preserved: the tiled floor, the stained-glass paneling of the interior skylights, the wooden revolving door lock, and some panel doors.

In 1927-1928, an institutional building called "Het Nieuwe Huis" (The New House) was constructed, originally consisting of 188 apartments of various types, as well as a reading room, a restaurant, stores, a post office, a bicycle shed and a tower.

The building is located on Roelof Hartplein with wings on Gerard Terborgstraat and Roelof Hartstraat. It was built on behalf of the Amsterdam housing cooperative 'De Samenwerking' as a home for unmarried people and designed by architect B. van den Nieuwen Amstel in the style of the aggravated Amsterdam School. At that time, the first floor housed the dining room for the residents and for the public, the stores with offices and storage rooms, and the post office. In the basement was the "bicycle hall". The reading room was located on the second floor. The remaining floors were occupied by apartments. At that time, the attic housed the kitchen, various storage rooms and some workshops. Already during the reconstruction in 1937 under the direction of Van den Nieuwen Amstel, the kitchen was located on the first floor next to the dining rooms. 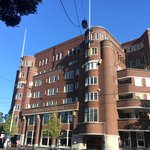 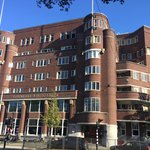 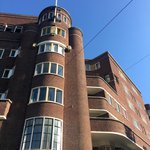 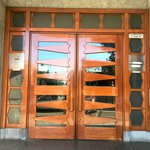 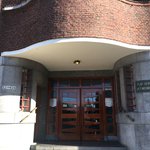 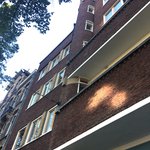 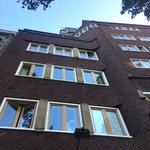 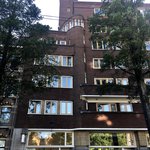 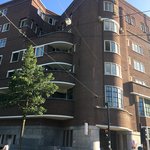 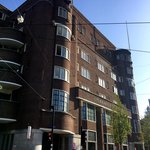