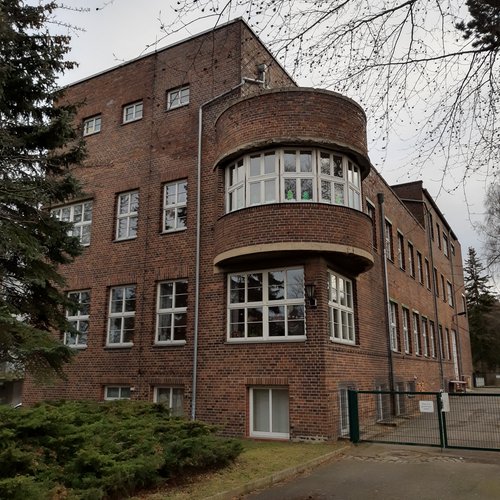 This building is one of the few designs by the architect Georg Wünschmann that has the characteristics of international modernism. The building is L-shaped and the facade is entirely made of clinker bricks. The different window sizes on the building are very noticeable. They were adapted to the respective room function. At the northwest corner of the building emerges for example a bay window. This room behind this window was used by the matron, which means that the hierarchy on the building can also be seen from the outside. This west wing of the building was and is reserved for the administration and day care. The larger part of the building is the clinic. The two areas are linked architecturally with a clock tower. For the clinic area there were originally 2 roof terraces on the 3rd and 4th floors on the south side. The windows on the 3rd floor could be fully opened to the terrace using a sliding mechanism. They were replaced in the 1970's by a wall with smaller windows, the terrace is still there. Under the terraces on the south side on the ground floor were the school and care rooms as well as the dining room. The patient rooms are still located above them on the 1st floor. The undated plans for the construction of the building have a building authority note from February 1928, so that it can be assumed that construction began in 1928.
In 1929 the association “Heim für gebrechliche Kinder” opened this clinic. From 1955 the home functioned as a municipal clinic for orthopedics and rehabilitation. It was named after Georg Sacke, a resistance fighter from World War II. A small statue of Sacke therefore still stands in the small park on the south side of the building. Since the reprivatisation and the re-establishment of the association, today this building is used again as a clinic for physically handicapped children and young people and as an early intervention centre and an integrated day-care centre. 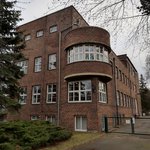 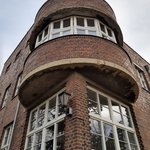 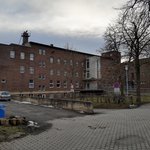 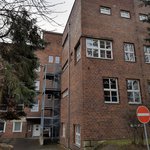 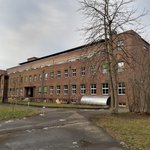 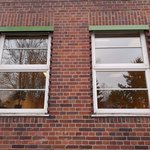