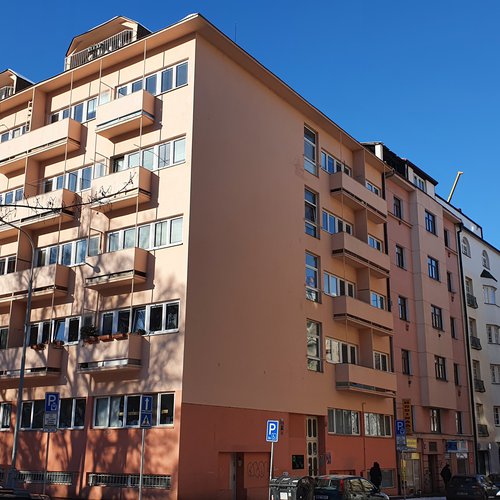 Hannauer's greatest wish was to build this "pension".

Three major differences on the exterior of the house can be seen on historical photos compared to how it looks today. The windows were originally pivot windows (very cool), probably with metal frames. They were replaced by common windows with plastic frames. Furthermore, there was a roof above the main entrance with the inscription "Arosa". This roof no longer exists. A third point is that the roof windowss were added later as part of the gable roof. The house was first designed with a flat roof.

He put the entire company and family in debt. After the building was completed, it got mentioned in foreign architectural magazines making it internationally famous. Hannauer appointed the very famous photographer Josef Sudek. His pictures increased the popularity of the house even more.

The term "pension" is somewhat misleading. This house is a collective house and an early form of the idea of social or socialist house building in the Czech Republic. Hannauer himself called this building a "housing factory". People were supposed to live together collectively. This means that they use a large, common kitchen, etc. The name "pension" is used because the house was designed like a hotel. The flats are small units that only ment for living, sleeping and washing, just like in a hotel. The living space is minimised.

Advertised as "you don't want a room for subletting, and you don't want a small flat in a tenement house". These flats were intended for teachers, professors, students, editors, singles or childless couples.

Arosa is a small town in Switzerland. We don't know if the house was named after that place, which actually makes little sense, except that in Arosa may have been a hotel.

Historical photo of the house:

Historical photo of the staircase: 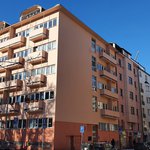