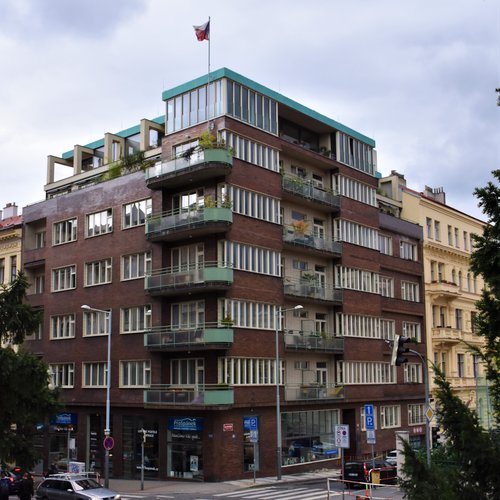 This house was excitingly reconstructed and extended in the 1990s.

A house with a lot of details and not quite a clear structure.

The house has a kind of "main section" along the street Na Smetance with five equally designed floors. Next to a centrally located zone with loggias, ribbon windows adjoining them to the left and right. This symmetrical part of the building has a certain classicistic austerity. At the corner with Italská Street, this kind of severity is softened by semicircular balconies, dominating the corner of the house.
The "main part" is adjoined by two lower sections, fitted with casement windows. Their fifth floor is set back to create space for roof terraces.

The ground floor is designed for shops and the entrance doors. The entire building is cladded with red ceramic tiles.

At the end of the 20th century, the house received the expressive structure with a new sixth floor. The "main part" of the building is given now even more prominence by the large glass panes. Some photos from the time before the reconstruction are on this website.

The couple Jiřina Prokopová and Josef Prokop hired Jaroslav Vančura to construct this building on the site of a former neo-Renaissance residential building in 1937. The first tenants moved into the house in 1938.

After the political change in 1989, the family's successors got the house back. The present owner Zuzana Meisnerová-Wismer commissioned the well-known Czech architect Ladislav Lábus to reconstruct the house. The works on the house began in 1995 and in 1997 he drew up a sketch for the roof structure, which was subsequently realised. 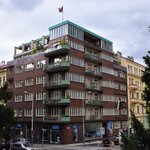 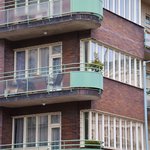 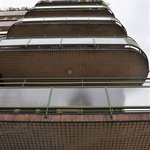 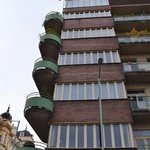 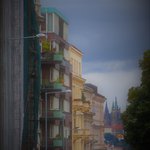