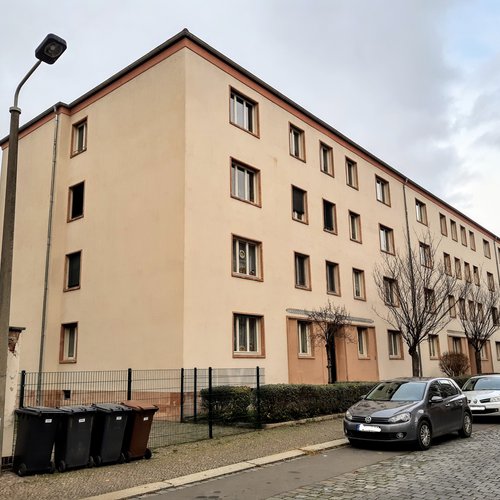 A quite interesting block that was built during the Nazi rule in Germany still with characteristic elements of modernism.

Coming from the southwest along Prellerstraße, this block appears at first glance to be quite modern by Leipzig standards. Little ornamentation, apparently flat roof and a small cornice as the upper end of the facade. One of the first clear indications that the building was planned and built during the Nazi regime are the dates on the building entrances, revealing the year of construction. The sgraffito band above the ground floor zone could also serve as a clue, but we don't want to commit ourselves. The most exciting effect is when the house is seen from the northwest or northeast. From a more distant point of view, the gable roof with a flat angle becomes visible. This roof form was often defined as Germanic and flat roofs as ideologically alien.

The block consists of three houses. Two houses are located in Prellerstraße. They have two flats of about 90 square metres per floor in the four storeys. This also shows quite clearly that with such large flats the housing construction concept of the Weimar Republic was abandoned, namely the creation of affordable housing with flats that were not too large. The house at Erfurter Straße 1, on the other hand, was designed with smaller two-bedroom flats. This house also has a semicircular porch decorated with flowers and vines in sgragitto. Originally, it was closed off by a turret with a needle tip.

All three houses are cladded on the ground floor with the porhyry type of "Rochlitzer Prophyrtuff", a regional volcanic stone. The eaves height is taken from the older neighbouring buildings, but the block stands about four metres lower in line than the rest of the houses in the street.

The architects began planning the houses on September 13th, 1934, commissioned by the "Offene Handelsgesellschaft" according to some sources. We don't know for sure whether this is a generalisation, because in German this term only refers to a legal function. The construction work lasted from 1935 to 1936. In the year of completion, the houses were sold to the "Allianz und Stuttgarter Lebensversicherungsbank". 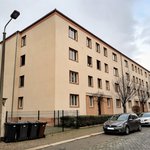 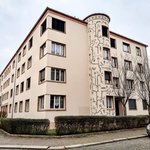 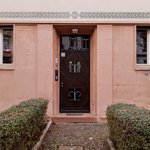 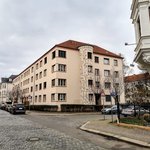